Digital magazine storefront Zinio has added a flat-rate, multi-title subscription option to its platform. The option recognizes a growing user base—nearly a quarter of customers—that reads three or more titles across devices.

The new offer, Z-Pass, gives users access to three magazines for $5 per month. About 300 of Zinio’s 5,500+ titles are currently eligible for the deal, with readers able to swap titles three times each month. Premium titles can be tacked on for $1.50 each.

"Zinio is passionate about connecting the world’s best content with avid readers and Z-Pass removes the price per magazine barrier," says Michelle Bottomley, president of Zinio, in a statement.

It’s not exactly the unlimited-access pass offered by Next Issue Media, a competing digital newsstand, but the move brings Zinio closer to that model. Conversely, NIM has opted out of the single-sale option completely. The company has two general subscription options available for $9.99 and $14.99 per month for its smaller library of 87 titles.

Magzter, another player in the digital newsstand market, offers single-title subscriptions and select bundled deals that vary in price. 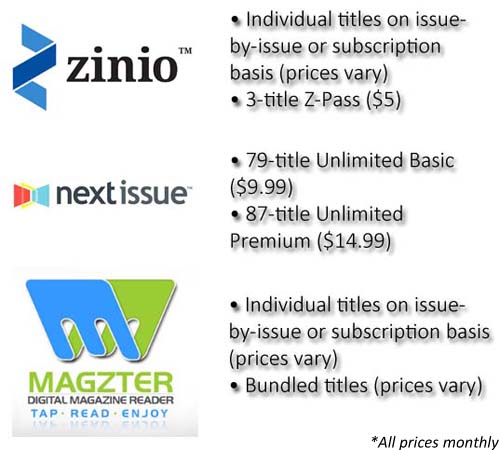