Zinio Discounts Entire Newsstand With Groupon
Readers in select cities around the USA can get $35 worth of magazines for $15. 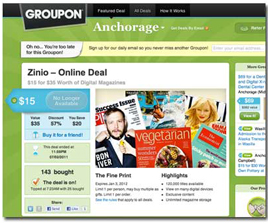 Digital magazine and newsstand provider Zinio is cashing in on the discount phenomenon with a new collaborative project with Groupon.

"We’ve been looking at creative, innovative and interesting new ways to educate the world about Zinio and what its opportunities are," says Jeanniey Mullen, global executive vice president and chief marketing officer for Zinio. "Groupon, among a number of those deal sites, have come into our radar and we’ve been actually considering working with one of these types of companies as a test for quite a while. We decided to go ahead and kick it off and the first city test just went live [Thursday]."

These initial tests give Groupon users access to $35 worth of any magazine in the newsstand for just $15. Users could get a year’s subscription to one publication, which could run as low as $14.99, and then buy several single copies of other titles for just $4.99, or another subscription. The deal ran in Anchorage, Alaska, Baltimore, MA and is live in Chattanooga, TN for the next four days.

"Groupon helped us make sure that the way we positioned the brand resonated with their fans and buyers," she says. "They work with you to craft the language to make sure that it’s as successful as possible. We were happy to have that because the Groupon audience is a group of people who love deals and they’re really interested in immediacy and something of value so, quite frankly, we weren’t sure if would be a huge success or a terrible disaster or somewhere in between."

There are over 4,300 titles in the digital newsstand offered by Zinio and the deals give individuals the ability to try any title with minimal risk.

Through working with Groupon, Zinio has access to a dashboard that provides insight on demographics and age. While it is still too early to tell whether this partnership will pay off for the newsstand, Zinio sees the demographic being reached matches what Mullen calls the company’s "best buyers."

According to Mullen the Baltimore discount ran in three different ways, with 350 Groupon users taking advantage of the deal. The Anchorage deal generated 143 buyers, the Chattanooga deal is still available.

"I’m hoping that it sells so well that it takes down the site and we can’t beat off the traffic," jokes Mullen. "I’m dying to see how it ends."