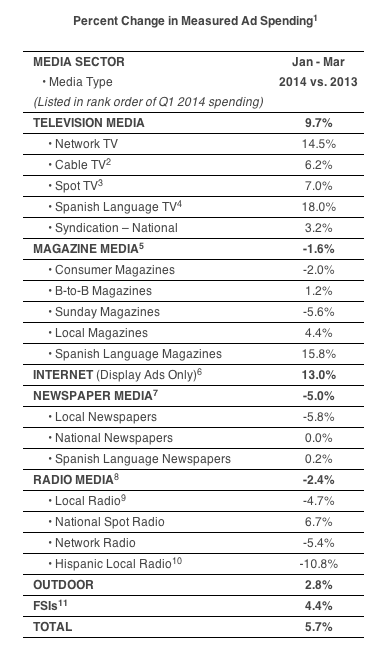 Advertising expenditures were up in the first quarter of 2014, according to Kantar Media data. Across sectors, advertisers spent a total of $34.9 billion, which was 5.7 percent more than Q1 2013.

The Winter Olympics proved to be a chief catalyst, which reportedly added an extra $600 million in incremental transactions. Of course, while some sectors thrived, others actually dipped from the previous year. Most of the growth occurred in the TV (+9.7 percent) and Internet display (+13 percent) sectors. Hardest hit were newspapers (-5 percent) and radio (-2.4 percent).

As a sector, magazine media ad spend declined 1.6 percent overall. Consumer magazines were down 2 percent from last year’s first quarter. Still, there was some noteworthy growth. Specifically in Spanish language titles, which upped ad revenue by 15.8 percent over 2013. B-to-b spending grew modestly at 1.2 percent. And local magazines had a comfortable uptick of 4.4 percent. Not surprising though, Sunday magazines declined 5.6 percent.