When Layoffs are Actually Good News
Cuts at Entertainment Weekly mean the magazine will survive—at least for now. 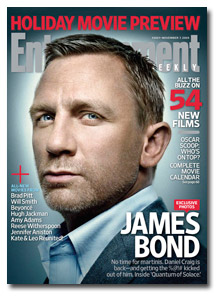 The mounting layoffs across the magazine industry have an inherent sadness attached to them. After all, these are actual people we’re talking about losing their jobs, not enigmatic, bloated, corporate cyborgs getting fat off the gristle (which is why I hate it when I read a report about layoffs which says something like “roughly 15” people were laid off—well, how many is “roughly 15” exactly?).

But occasionally layoffs are actually good news, specifically when they come from a magazine that roughly every single person I’ve talked to in the last two months thought was going to be shuttered: Entertainment Weekly.

Via the New York Observer:

Roughly 15 editorial staffers were laid off today, with potentially more coming. So far, no staff meeting has been convened, and staffers are being informed of the bad news on a case-by-case basis. … Update, 4:48 p.m.: A source tells us that there are now roughly 20-25 layoffs at EW.

Cutting 25 people at a single magazine, even at a behemoth like Time Inc., might seem like a lot. A "bloodbath" even. And it is. But at least they’re not folding the magazine, as some have speculated, back into People, or sending it into the ground.

Why the grim speculation? Simple: performance. Through September, EW is down 19 percent in ad pages—double the industry’s 9.5 percent slide—according to the Publishers Information Bureau, and down 7 percent in single copy sales during the first half of 2008, according to ABC’s Fas-Fax.

If EW can survive the layoffs after eking through the Writers Guild strike that ostensibly shut down L.A. last year, who knows? Maybe the magazine will emerge better than ever. It would be quite the Hollywood ending.