When Announcing Layoffs, How Can the Future Be ‘Bright’?
Assessing b-to-b CEO layoff memos. 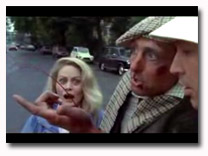 In National Lampoon’s European Vacation, there’s a scene where Eric Idle, playing an English bicyclist, is hit by the Griswald family vacation rental car (Chevy Chase can’t quite get used to those tricky U.K. driving patterns). He’s bloodied and bruised, but still insists on giving the tourists directions. When blood starts shooting out of his wrist, Idle downplays it as "just a flesh wound."

I wonder if there’s a magazine industry counterpart in the memos that sometimes get sent accompanying layoffs.

Take Penton Media CEO John French’s memo last week announcing the layoffs of 42 staffers. It outlined the challenges of transitioning to a multi-stream revenue model, shoring up print, dealing with a poor economy and operating in many markets, some of which are performing well for Penton and some of which are not.

But it also stated that "Penton remains a very strong company and the long-term outlook for our organization is bright."

It’s a tough job running a media company these days, especially in b-to-b.

And it’s terrible to lay people off (although worse for the people getting laid off). And French’s memo was gracious and empathetic.

But let’s face it, when you’re any media and you’re laying people off; when you’re asking your managers to reforecast because you’re missing your numbers; when your print magazines are shriveling; when you haven’t raised rates for print ads in years; when online-only competitors are cropping up all around; when employees are leaving to start competitors; when you’re so busy protecting declining print businesses that you’re always a step behind in e-media; then maybe the future isn’t so bright, and maybe you should say that.

I’m not singling out Penton. What French says is true of Reed, Nielsen, Cygnus, PennWell, Ascend—all of the big multi-market players.

Then again, perhaps it is merely a flesh wound. Perhaps.

Bonus video clip of the "flesh wound" scene below: