What’s in a Redesign?
How 3 magazines retooled their aesthetic to improve the reader experience and increase engagement. 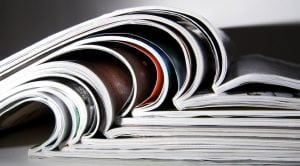 For all of the societal benefits afforded by the age of connectivity, much has been written (in this publication and elsewhere) about the detriments—the misinformation, the polarization and the isolation that the constant deluge of content, algorithmically tailored for individual users and delivered in a customized feed, can somewhat ironically foment.

But as readers have shifted much of their media diet from the printed page to the digital screen, many magazine publishers see an opportunity for their print products to serve as both a relaxing escape from the flood of information online and a complement to it, taking lessons in design and UX from one medium and applying them to the other.

“In a weird way, print has become more important by virtue of the fragmentation of the attention economy,” says Chris Lehmann, editor of The New Republic.

Here, we look at three very different magazines that have each made significant changes to the aesthetics of their print editions in an effort to make them more engaging and, perhaps more importantly, to make the case for their continued vitality in the years to come. 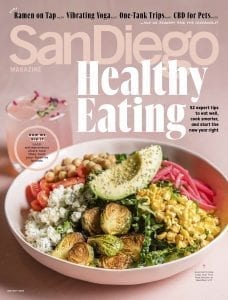 Getting the most out of limited resources

Only the fourth editor-in-chief in San Diego magazine’s 72-year history, Erin Meanley Glenny previously implemented a redesign of the magazine at the start of 2017, but says her relatively small team had wanted to undertake another one for at least a year, setting January 2020 as a target.

“It’s hard because you’re not just talking about a new look, you’re introducing new franchises and formats and new names for sections, and it all needs to make sense together,” she tells Folio:. “Everyone calls it a redesign, but in my head it’s a reorganization. The new fonts are just the accessories.”

Beginning in May of last year, Meanley Glenny’s team began holding brainstorm sessions for three-to-four hours at a time, a process she described as “a rabbit hole” of existential questions—”Who are we? What do we want to be?”

“Mostly I wanted something that a busy person with very little headspace could not just take in, but would be pulled into,” she says. “Ultimately, I really saw this as our chance to make another case for print, or for what I call ‘slow content.'”

One person alone can write a blog post or create an Instagram story, she notes, but a print magazine requires a collaborative labor of love spanning writers, editors, photographers, designers, researchers and copy editors. “This is slow content for a slow read. It’s meant to be savored.” 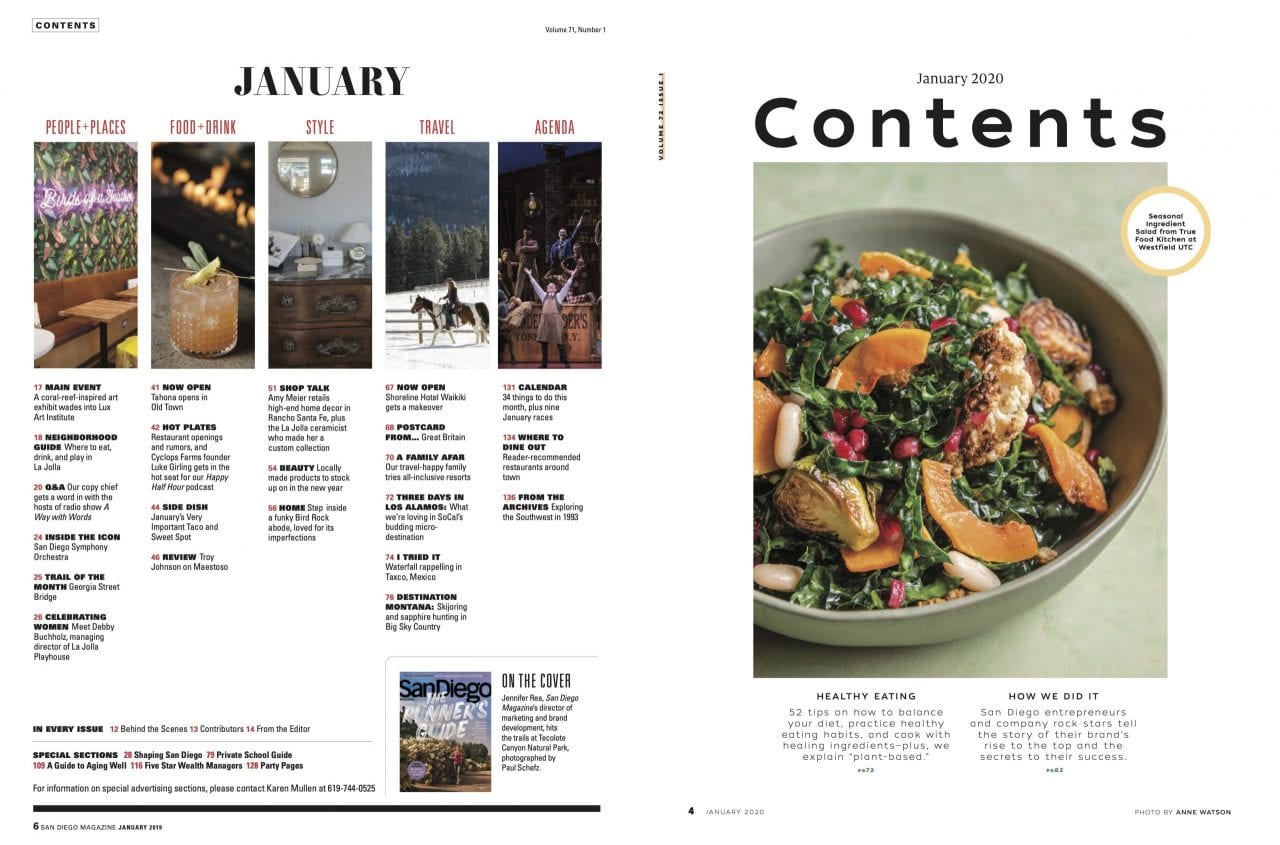 “My main reason for that was, if you find out you only get 60 editorial pages, for example, you don’t want to waste any on full-page openers. The fewer the sections, the fewer the wasteful openers. Don’t get me wrong, they can be very pretty, but sometimes they are a supplied image of a musical that’s touring, or opening day at the fair, which we’ve all seen before. Magazines are getting slimmer, and it’s not just about how few pages you get, but what you do with those pages, and how they’re shared between the different topics and beats.”

From a design standpoint, Meanley Glenny says she focused on injecting the magazine with a more modern look, with cleaner fonts and a wider color palette. Clarity was important in terms of presentation, she said, but also in terms of legibility—San Diego Magazine‘s readership has a median age of 47.

“Like everyone else, New York magazine is our bible,” she replies when asked which publications her team looked to for inspiration. “A lot of people in our office are Bon Appétit devotees. We also looked at other city/regionals, especially St. Louis Magazine, Texas Monthly, Atlanta and Washingtonian.” 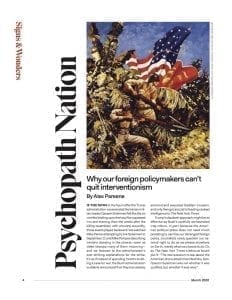 Honoring the legacy, while looking toward the future

Less than a year after joining The New Republic from The Baffler, editor Chris Lehmann felt the time was right to convey a new identity by altering the 106 year-old magazine’s look and feel, involving everything from the logo and cover to type treatments and layouts inside the book.

“Inherently, at a magazine that’s been around for over 100 years, you’re always mindful of the legacy,” Lehmann tells Folio:. “But as a journalist, you’re also mindful of the need to address the urgent political moment and the stories that need to be told.”

Working with a team led by Eddie Opara, a partner at the design studio Pentagram, The New Republic developed an entirely new look and feel for the magazine, debuting with its March 2020 issue and marking the title’s first major redesign since 2015.

The most obvious departure from the prior design is the magazine’s cover, which features a new logo developed by Pentagram and aimed at conveying elegance and authority, but also energy.

“The effect we’re going for is to have readers of the print magazine kind of stop in their tracks and think that they have to learn more about this urgent message that’s being conveyed,” says Lehmann. “It’s visually engaging but it also respectfully reflects the intellectual content of the magazine.” 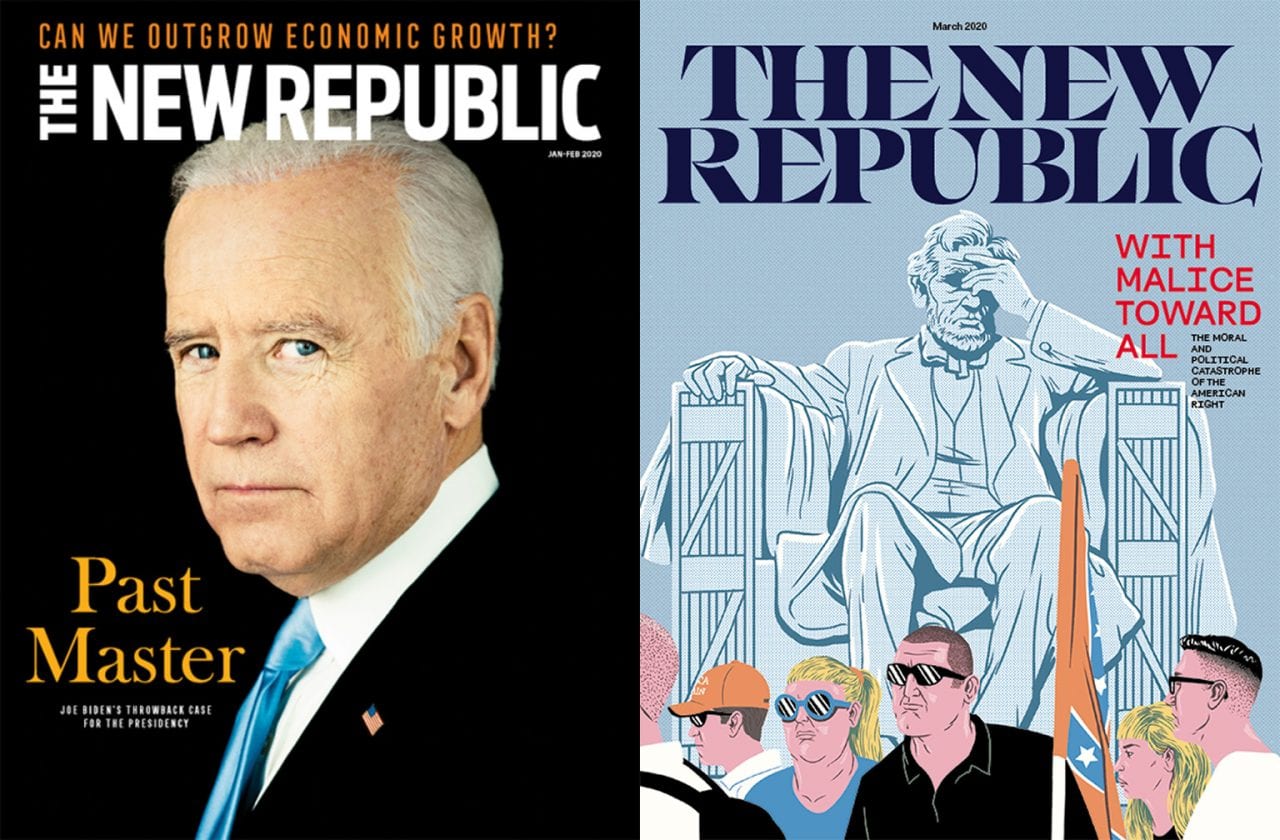 Both on the cover and inside the book, Opara says his team was focused on, among other things, underscoring the TNR brand’s value and better enabling commonality across print and digital design—key, he said, to reaching a new generation of readers.

“We wanted to bring in a fresher understanding in regards to digital choices and expressive typography,” Opara says. “One of the things we just don’t do is use a particular font without any rationale. We have to have a reason. Within the actual magazine, we wanted to avoid layouts that felt boxy, avoiding the overuse of entry points within the text.”

Opara lists a number of magazines his team looked to for inspiration—The Economist, The New York Review of Books, New York magazine and n+1, among others—seeking to adopt certain elements that made those books stand out while imbuing them with The New Republic‘s own style and sensibilities.

Another change spearheaded by Lehmann prior to the March issue was reorganizing the magazine’s front-of-book section.

“When I first started here, we had a section that we called ‘the snake,’ because it was a series of short-ish essays that just ran up against one another with art that was generally contributed by a single illustrator,” he says. “Not to be unduly critical of the past regimes, but it did not accord with my understanding of the way a front of the book should look and feel. So I said, in essence, ‘snakes are bad. Let’s get rid of them,’ and instead have something that’s a lot more diverse in terms of visual content and mood.”

The basic philosophy of a front-of-book section hasn’t changed much over the years, says Lehmann—who also worked at Newsday, New York magazine, The Washington Post, and Congressional Quarterly prior to The New Republic—likening it to the first course of a meal, preceding the entree that is the feature well.

Dramatic alterations may represent a daunting proposition for any editor tasked with stewarding a magazine that’s been in print for a century, but Lehmann believes editors can’t be immobilized by legacy, especially in the digital age.

“In a weird way, print has become more important by virtue of the fragmentation of the attention economy,” he says. “I think people want a voice that can speak with authority, that does not shy away from intellectual tensions. We are in the business of inviting readers to think more deeply, not to react to some outrageous comments on Twitter. The tradition of a journal of opinions and ideas is that you are deliberately creating the intellectual space for someone to sit and consider an argument at length.”

Across the Atlantic, the London-based scientific journal Nature marked its 150th anniversary late last year by undergoing the first redesign in its history that specifically took the digital experience into account.

“Design is not solely about how something looks; it is also concerned with how it works, and that understanding has never been more urgent than in the digital age,” writes creative director Kelly Krause in an essay explaining the changes to the magazine’s aesthetic across platforms. “As publishers, we’ve asked how we might assist working scientists. We have heard your pleas, many stemming from information overload and the need to pack ever more data on to small screens.” 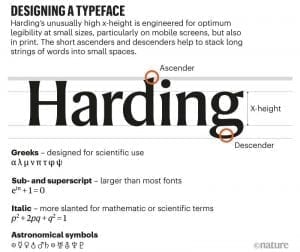 To meet these demands, the Nature team partnered with the design firm Commercial Type to develop a custom font, Harding, for both the magazine’s cover logo and the body text in both its print and digital editions that specifically caters to the needs of the technical, scholarly articles in its pages. Sub- and superscripts common to mathematical equations are larger and more legible, letters of the Greek alphabet more distinct from their Latin counterparts and italics more visually slanted than is standard. Central to the design of Harding is its legibility on smartphones, Krause says.

“To boost readability in a limited space, it helps to enlarge the main portion of the lower-case letters, while making the ascenders and descenders (as in ‘h’ and ‘g’, respectively) smaller. Ultimately, this renders long, complex strings of words easier to parse, and allows for neat stacking of lengthy technical research-article titles over a number of lines.” 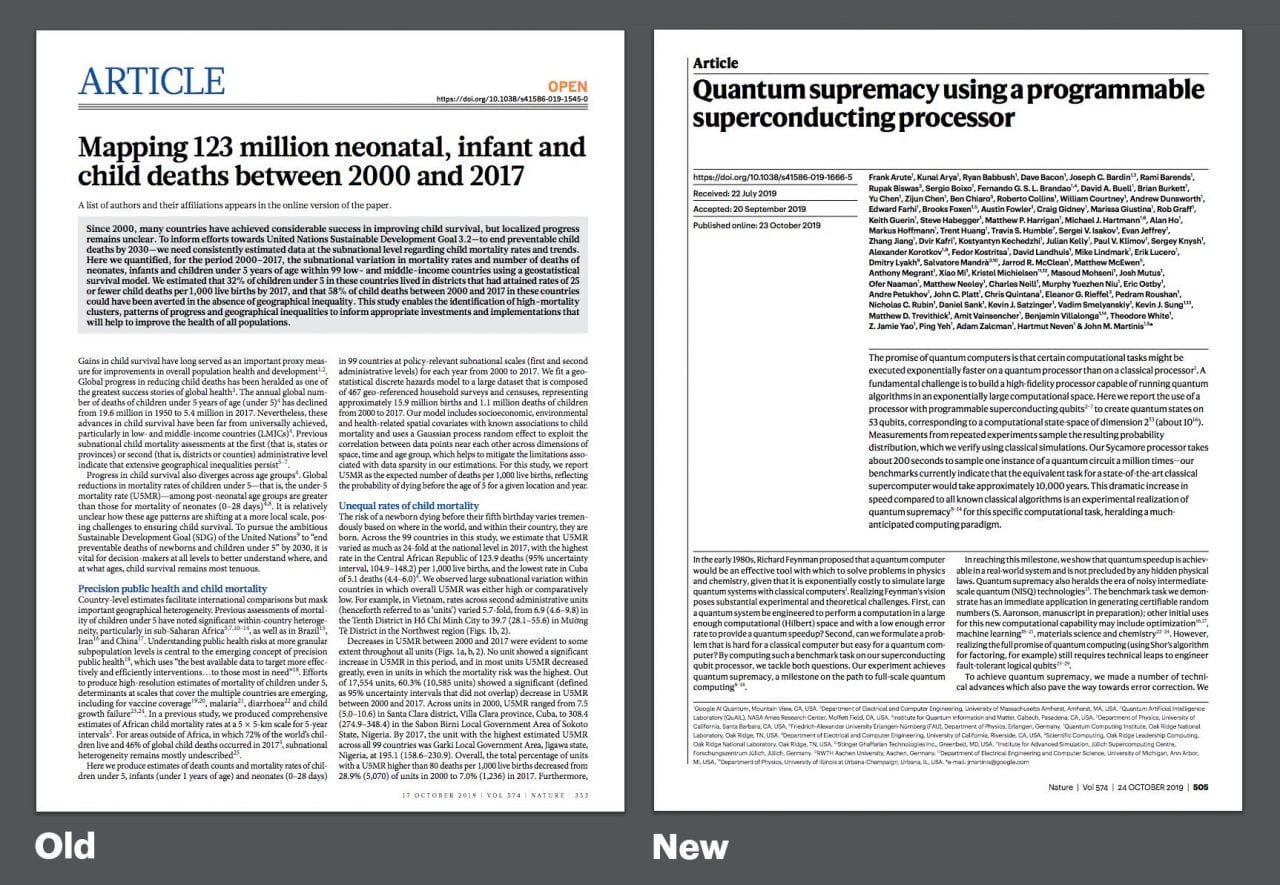 The result is a print journal that Nature hopes will be easier to read, but also one that more easily facilitates a unified aesthetic, as Krause puts it, “from coffee table to Twitter feed.”

“I’m happy to say that it has been very well received by our readers, who are primarily scientists and researchers,” Krause tells Folio:. “They particularly like the Harding typeface, both in print and online.”