After nearly two years of ongoing scrutiny related to the alleged activities of its CEO, David Pecker, and chief content officer, Dylan Howard, the company now known as American Media, LLC is moving on to life after The National Enquirer, the cornerstone upon which Pecker built his tabloid empire after taking over the company in 1999.

The $100 million sale of the Enquirer and its sister titles Globe and National Examiner to Hudson News heir James Cohen—agreed upon in April and reportedly pursued at the behest of the company’s hedge fund backer, Chatham Asset Management—is expected to be completed by the end of the year.

Pecker has said that going forward, American Media is “keenly focused” on its portfolio of non-tabloid brands, many of which, including Men’s Journal, Us Weekly, In Touch and several adventure sports magazines, have been acquired over the past year. It also plans to further reduce the debts it incurred through these purchases (after the Enquirer sale, the company says its overall debt will total “only” $355 million).

Another area in which the publisher is apparently placing its bets is the increasingly legal $13 billion North American cannabis industry.

Earlier this month, Neptune Wellness Solutions—a Quebec-based provider of “natural alternative products,” including cannabis and hemp extracts, fish oils and other supplements—announced a new partnership with American Media under which the publisher will provide Neptune with advertising and creative services for the next 12 months in exchange for the option to purchase equity in the company, which aims to bring its consumer-facing products to the U.S.

Under the terms of the agreement, American Media will be issued warrants allowing it to purchase up to 3 million common shares of Neptune at any point in the next five years at a fixed rate of $8.00 (at press time, Neptune [NEPT] was trading at $3.47 on the NASDAQ). Neptune, which raised $41 million from institutional investors in a private placement over the summer, acquired a North Carolina-based hemp extractor for $18 million in May and has signed partnerships with major supply chain players, including International Flavors & Fragrances, over the past year.

“We are very excited to partner with Neptune as American Media’s vast portfolio of brands are uniquely positioned to further influence the extraordinary growth potential and momentum of the company,” said Howard, who was identified as American Media’s senior VP of corporate development, in a statement. 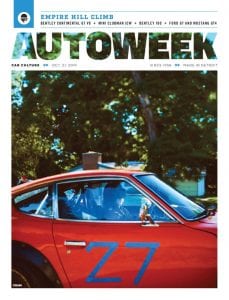 Effective immediately, Hearst Magazines has entered into a multi-year licensing agreement with Crain Communications to take over the business and editorial operations of Autoweek as a “digital and experiential brand,” meaning its twice-monthly print magazine is being shuttered after 61 years.

In an announcement, Hearst said Autoweek‘s existing staff will remain based in Detroit, but will report to Hearst Autos’ New York-based head of special projects, Patrick Carone, who joined the company in August after earlier tenures at Entrepreneur and Maxim magazines, among others.

“Car and Driver serves car lovers and shoppers. Road & Track is for the auto enthusiast. Autoweek’s legacy of delivering the most current and compelling news around cars and car culture perfectly rounds out the portfolio,” said Hearst Autos CEO Matt Sanchez in a statement, adding that Hearst intends to continue to invest in Autoweek‘s “ambitious content.”

In the same announcement, KC Crain, Crain Communications’ president and COO, noted that Autoweek had been the only remaining consumer-facing title in Crain’s portfolio, which also includes Ad Age, industry-focused Automotive News and four regional Crain’s Business publications, among several other B2B brands.

Another magazine launch from Meredith…

Arriving on newsstands in January: a new print magazine based on Drew and Jonathan Scott, better known as the stars of the HGTV franchise Property Brothers.

If any of this sounds at all familiar—a quarterly lifestyle magazine based on popular HGTV house-flipping personalities with a wide, national newsstand presence and annual subscriptions priced at $20—it’s because it comes essentially straight out of the playbook that brought us The Magnolia Journal, the company’s 2016 launch in partnership with Fixer Upper‘s Joanna and Chip Gaines, which Meredith Magazines president Doug Olson has repeatedly described as “one of the most successful magazine launches in history.”

After an initial run of 400,000 copies and a cover price of $7.99, that magazine now boasts a rate base of 1.2 million and more than 750,000 paid subscribers, according to data from the Alliance for Audited Media.

The Scott brothers magazine will get a slightly wider initial run of 500,000 copies at a cover price of $9.99, but Meredith isn’t releasing too many other details, such as the magazine’s title, at least for a few more weeks, per an announcement.

Life after print at ESPN The Magazine…

A month after shipping its 692nd and final print issue, ESPN The Magazine begins its next chapter tomorrow with the launch of “Cover Story,” which it describes as a monthly “access-driven” feature incorporating both video and long-form writing that will live on ESPN’s digital platforms as well as TV broadcasts of SportsCenter.

The first installment, centered on Sabrina Greenlee, the mother of NFL wide receiver DeAndre Hopkins, will debut on the 6 am hour of SportsCenter Wednesday morning, with an accompanying feature story by reporter Mina Kimes, who is taking on an expanded role at ESPN that will also see her host a new daily podcast launching later this month.

“Inspired by those most impactful magazine pieces, our biggest story each month will feature signature photography and the creation of an original ESPN poster-style cover, along with both long-form written and television pieces, produced at the highest level,” said Alison Overholt, the former ESPN The Magazine editor-in-chief who has now taken on the title of VP, editorial director and executive producer, ESPN. “And it will all travel across ESPN TV shows, social channels and on the ESPN App in true cover-story fashion—the featured athlete’s story will own the day.”