In the War on Truth, Complacency Is Not an Option
You have a voice. Use it. 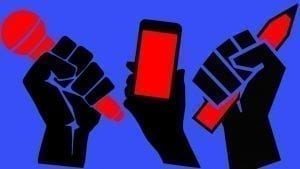 What did you do in the war?

It was one of the most salient questions of the 20th century, as pregnant with harrowing implications as it was innocent. Now, as we complete the first decade of the new century, it bears repeating. Because we—we as citizens and humans and especially we of the press—are at war.

It is a war we did not start, but one that must be fought to the finish. It is a war against truth, against freedom and against a future for our grandchildren. In short, everything that matters.

Bizarrely, but unsurprisingly, it is a war in which we—the media—have been cast as the enemy. The enemy of the people. Us.

And, by the way, not just the press.

I am not here to debate politics. I am here to say that you, as publishers, are facing the battle of your lives. And I’m not talking about revenue, either. I’m talking about your place in our democracy. So in this year-end meditation, permit me to dispense with the usual review of 2019, the year in publishing. This is about assessing the battlefield, and the assessment is grim. We have witnessed the ascension of dark forces threatening the free press, and therefore the public that we are a proxy for.

As of Dec. 10, according to The Washington Post‘s Fact Checker staff, the president of the United States had made 15,413 false or misleading claims in 1,055 days in office. More than half of them were in 2019. Some are inconsequential (“people are flushing the toilet 10 times, 15 times”); some are existential (“I’m not denying climate change. But it could very well go back.”); some are never-dying Zombie lies (181 times for the wildly inaccurate “biggest tax cut in history” claim, 60 times that the Ukraine-call whistleblower was inaccurate); some are impeachable (“It was a perfect call.”)

As you only too-well understand, the fact-checking process is rigorous, precisely documenting Trump’s statements against data, transcripts, eyewitness testimony, settled history and other scholarship. It is not a bunch of truculent enemies of the people saying, “Nuh-uh!”

I invoke his lying pathology because, now that he begins 2020 facing impeachment, it constitutes half of his defense. The first half is to stonewall Congress by refusing to comply with subpoenas and witnesses the House has sought to further expose his conduct.

But beyond that is a wholly preposterous conspiracy theory flogged by him, Sean Hannity, John Solomon (formerly of The Hill), Rudy Giuliani and now countless Congressional Republicans that it was the Ukrainians, not the Russians, who interfered in the 2016 election; that the proof is in a captive email server smuggled to Ukraine by the Ukrainian security company CrowdStrike. Plus obviously corrupt Joe Biden and obviously traitorous Ambassador Marie Yovanovitch.

But it’s not as though a rogue administration has run roughshod over the Constitution and truth itself now facing the consequences in the Senate. It is a rogue administration that has done the very same thing and, with allies as loyal as Saddam Hussein’s puppet Parliament, will prevail there. And then will claim vindication and then will be both victor and martyr and then God only knows. We know this for sure: he’s after you.

I just cannot state strongly enough how totally dishonest much of the Media is. Truth doesn’t matter to them, they only have their hatred & agenda. This includes fake books, which come out about me all the time, always anonymous sources, and are pure fiction. Enemy of the People!

So, what are you going to do about it? You didn’t ask to be in this war, but here you are. How did you spend you spend your last year, or three years? While you were chasing revenue streams and trying to get screwed less by Facebook and Google, did you spend even a moment defending your role in our democracy, your responsibility to your audiences, your patriotic and human duty to preserve and protect truth itself?

When all is said and done, when white nationalists roam freely, when incomprehension and the perception of personal slights turn into trade wars and shooting wars, when social progress is jammed into reverse, when the planet is a cinder, how will you answer your grandchild’s question: “What did you do in the war?”

If your answer is, “We didn’t do politics,” you will have to face the historical judgment of complacency, which is an insidious form of collaboration. Silence=death. You have a voice. Use it. Because if you don’t, your grandchildren will not understand.