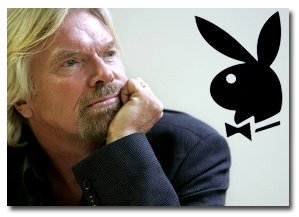 After rumors of his interest in acquiring Playboy sent its stock on a short flight, Virgin Atlantic CEO Richard Branson said today his company has no interest in buying the magazine.

"Reports that Virgin Group is looking to buy Playboy Enterprises are untrue," a Virgin spokesperson said in an-email to Reuters.

On Wednesday, the Daily Mail reported Branson was “tipped as a potential buyer.” The story followed a report in the New York Post that Playboy was quietly floating an asking price of $300 million, or about three times its market cap, for the company.

The Virgin/Playboy rumor sent the publisher’s stock from $2.80 cents per share at the market open Wednesday to $3.38 a share—or about 20 percent—by midday Wednesday. (The stock closed at $3.20 per share Thursday.)

During a February conference call, interim Playboy CEO Jerome Kern said the company would be open to discussions of a possible sale.

Even without a sale, though, it has already been a transformative—and rocky—year for Playboy’s business.

In January, Christie Hefner, daughter of founder Hugh Hefner and Playboy’s CEO of 20 years, stepped down.

That same month, Playboy said it would close its New York offices and combine its print and online editorial operations. Jimmy Jellinek—former top editor of Maxim who served as senior vice president of Playboy’s digital content division—was promoted to editorial director, overseeing the company’s combined editorial content. Chris Napolitano, who served as editorial director of the print magazine, stepped down.

Earlier this month, while the company reported a $13.7 million quarterly loss, Kern said Playboy is considering "radical changes" of the print business model, including price increases, a frequency reduction and lowering its rate base of 2.6 million. The company also said it would combine Playboy’s July and August issues into a double issue.

Last October, Playboy eliminated 80 positions across the company in a cost-cutting effort, and closed its DVD business.