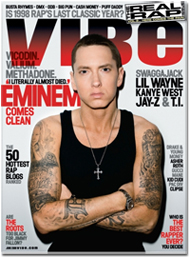 Another music magazine has succumbed to the unfriendly ad economy. Vibe magazine is shutting down today, a spokesperson confirmed to FOLIO:.

The June/July issue will be its last and the Web site will remain open for one more month, but without new content, said the spokesperson.

In March, Vibe Media Group announced a set of changes to position the magazine for survival— including four-day work weeks and salary cuts of 10 to 15 percent—and to counteract a 42 percent slide in first-quarter ad pages, per PIB.

The magazine also planned to cut its guaranteed rate base by 25 percent in July to 600,000 copies and drop frequency to 10 times per year.

Unfortunately, none of those tactics worked. According to a statement emailed to FOLIO:, the staff was in the middle of preparing a Michael Jackson tribute issue when they received the news.

In a memo to staff, Vibe Media Group CEO Steve Aaron said the "collapse of the capital markets" and "the lack of investment resources to restructure the huge debt on our small company has made this outcome become a reality."

Vibe Ventures was acquired by The Wicks Group, a New York-based private equity firm, in the second half of 2006 for $36 million in a half cash, half debt transaction.

"At the end of the day it’s a tough environment for everybody but it’s extremely difficult for magazines that depend on the fashion and auto categories," Len Burnett, who helped launch Vibe, told FOLIO:. "And it’s even tougher to try to recover or do well during a time that you haven’t been able to expand the brand in an environment that demads it at a time like this."

The memo is reproduced here in full:

It is with a heavy heart that I share some tough news, VMG is closing down effective today, June 30 due to lack of additional financial investments.

It’s been an 16 incredible years since VIBE’s inception. There are very few magazines with the richness of history and breadth of talented visionaries who created the powerful lens in which VIBE viewed and shaped urban music and culture.

Ever since I first set foot in this courageous company, I’ve regarded myself as incredibly fortunate to be be involved with this remarkable brand and group of individuals whose performance has never been nothing short of outstanding. We finished 2008 in an improved position versus the prior year, and accomplished so much, including:

Unfortunately, over the last several months, a confluence of events has obviously posed VMG to exceedingly serious challenges.

The collapse of the capital markets has impacted us greatly. Over the past several months, we have actively pursued investment resources while working intensively with our bank to find a solution. But the deal market right now remains very poor and at the end of the day, the lack of investment resources to restructure the huge debt on our small company has made this outcome become a reality.

The print advertising collapse hit VIBE hard, especially as key ad categories like automotive and fashion, which represented the bulk of our top 10 advertisers, have stopped advertising or gone out of business. It’s also unfortunate that in a recession many companies reduce the multi-cultural campaigns. These facts, coupled with the continuing decline of the music industry not to mention the newsstand wholesaler consolidation in early 2009 all negatively impacted our business in a significant way.

The relentless economic situation has depressed our growth initiatives on the digital front. To be clear, VMG has made significant improvement in this part of our business, but not at the accelerated pace required to offset the devastating effects of the most severe recession in our lifetime and the accompanying print losses.

I want to thank you all for your hard work and commitment, and for all of the adventures along the way. I’ll miss this place a lot, but I’ll miss you all and the magic you create.

Vibe will be remembered as a shockingly brilliant content company that everyone can be proud of and I look forward with great excitement to all of future endeavors you all pursue.

With great affection and respect—