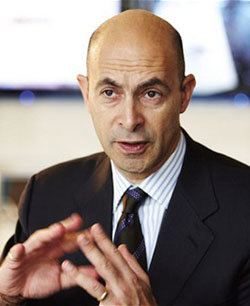 Updated | 9/30: David Levin is stepping down as CEO of UBM after eight years at the head of the UK-based events and communications giant, the company announced today.

Levin intends to leave by July 31, 2014, but is expected to stay on throughout the search for his replacement.

"I have really enjoyed leading the transformation of UBM’s business over the past eight years, together with a great group of colleagues," he says in a statement. "UBM’s two main businesses, Events and PR Newswire, offer significant opportunities for growth, both organic and by acquisition. UBM has built its businesses in the emerging markets of China, India, Brazil, Turkey and the ASEAN region while strengthening its largest position in the USA."

Dame Helen Alexander, chairman of UBM, mirrors Levin’s statements, saying: "David has led the remarkable transformation of UBM into a focused, international events-led marketing communications business during a time of huge change in the media industry. He has successfully laid the foundations for UBM’s next phase of develppment."

Levin did expand the company’s events division and its position overseas, acquiring more than 100 companies and divesting more than a dozen*, but raw overall growth was markedly slower in the second half of his tenure, according to yearly statements. UBM posted double-digit revenue gains in three of Levin’s first four years, while failing to top 5 percent in all but one of the next four.

Revenue grew just one half of one percentage point in 2012 and continued downward in the first half of 2013, falling 1.5 percent year-over-year.

**Underlying revenue growth, accounting for the turnover in the company’s holdings, has been more consistent. UBM had gains above 5 percent in each of the last three years.

Events had been at the core of Levin’s strategy. The segment accounted for about one-fifth of the company’s revenue in 2004—the last full year before he joined—but represented more than half of UBM’s earnings in 1H 2013. After a period of strong growth, events revenues declined 1.1 percent in the first half of 2013 however.

Several analysts noted that Levin’s departure could lead to a sale of part or all of UBM, in comments to The Financial Times. 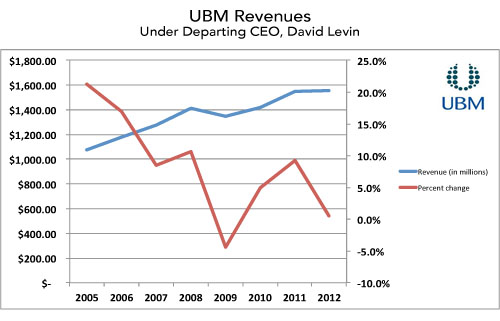