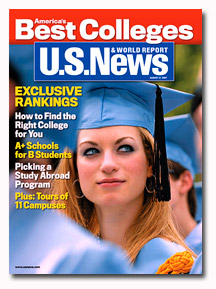 The site underwent a major redesign this year, offering more tools, articles and better accessibility of the ranking data. New content includes a section on new and up-and-coming schools, picks from high school guidance counselors, a student forum and a gallery of more than 2,000 college-related videos. A student center also includes calculators and in-depth information on college loans. “This has enabled the user to take a deeper dive into our content,” says Holiber.

U.S. News also expanded its relationship with major portals such as Yahoo and AOL to feature some of the Best Colleges content and direct traffic back to the Best Colleges site. Overall, the U.S. News Web site is up 30 percent over last year in terms of traffic, according to Holiber.

The publisher has sold major online ad packages on the site to Dell and Microsoft Office Student. The print issue for Best Colleges also saw a bump this year, says Holiber. “Not everything is integrated between our print and online-only revenue,” he adds. “But in print, this is the best year we’ve ever had in terms of endemic, college-related advertisers.”