On Tuesday Twitter announced that it’s launching a new analytics tool that will initially be available to a select group of partners as a pilot program, but will be made available to everyone in the "next few weeks."

The tool will enable Web site developers to more accurately measure Twitter traffic referrals and how well the Twitter features they’ve integrated into their sites are performing.

The tool is essentially the result of Twitter’s acquisition of BackType in July. According to the company’s announcement yesterday, the tool will have three core functions: the ability to understand how content is being shared across Twitter; the ability to measure the traffic Twitter is sending to a site; and measuring the effectiveness of the Tweet button integration.

In the last five years, Twitter has grown to 100 million monthly users, says the company, with about half of them logging in at least once a day.

The analytics tool was debuted at the TechCrunch Disrupt event where Twitter’s director of Web business development April Underwood said the platform is driving 100 million clicks per day to sites across the Web, reports TechCrunch’s Leena Rao.

Underwood told attendees that the analytics tool will be free. The company also plans to make the Twitter Web Analytics API available to developers to incorporate it into their products.

TechCrunch has video from Underwood’s announcement at the Disrupt show. 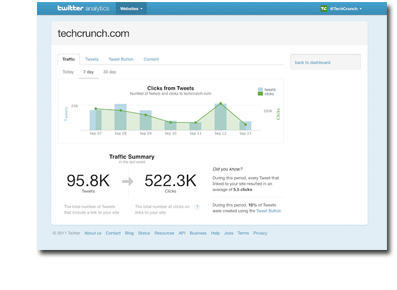