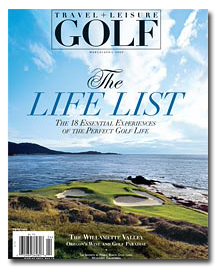 American Express Publishing has decided to shutter the print edition of Travel + Leisure Golf. The March/April issue, on newsstands now, will be the final issue.

"While the award-winning editorial product has enjoyed a loyal and passionate following, the current advertising climate has severely impacted the magazine’s bottom line to where the short-term and mid-term prospects for the magazine are not viable,” president and CEO Ed Kelly said in a statement.

As part of the decision, 18 employees have been laid off but could be placed elsewhere within the company, “where possible,” a spokesperson told FOLIO:.

American Express Publishing is considering its options for the brand’s other elements, including its events platform and Web site. The publisher will maintain the Travel + Leisure Player’s Club, an affinity club, the spokesperson said.

Travel + Leisure Golf carried a bi-monthly circulation of 625,000. Ad pages were down 13.9 percent in 2008, according to Publishers Information Bureau figures.