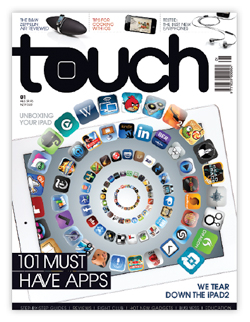 Awarded the best in design for new publications, touch finds its muse in its subject matter: Apple. When describing the overall look of touch, an Australian-based publication for iPad, iPhone and iPod users, studio manager Keely Atkins says, “It’s aesthetically beautiful with lots of white space—the magazine had to fit the Apple look and lifestyle. The layout is easy to read and navigate, and has a fresh feel.”

Touch aims for an expansive reader demographic, assisting Apple users in the navigation and optimization of their gadgets. “Our idea was that an entire family or a business can share a copy of touch and get something out of it. In the past, PC users would not go to an Apple-related magazine, and now with iPad and iPhone, there is a new market,” says publisher Liana Pappas.

“Instead of a standard-looking tech magazine, it is more lifestyle-designed. It has to be beautiful,” says Atkins.

The magazine also aims to capture the Apple aesthetic to create synergy between the products and the publication. Atkins tells FOLIO: color choices for touch are based on the palette of the iPad 2’s cases.

For cover font, Atkins says, “Avant Garde is a beautiful, open and easy-to-read sans serif, which I teamed with Tiempos as the serif font. The masthead is Avant Garde. It’s black on white, because it has to stand out on the newsstand.”

Despite its software focus, touch staff decided to offer a print version in addition to a digital version of the publication (produced through Zinio). The magazine is currently available in Australia, New Zealand and sections of Asia, with a small presence in Poland and New York. Touch is published by Niche Media, and has the same staff as sister magazine Macworld Australia: editor-in-chief Dave Bullard, studio manager Keely Atkins, deputy editor Grace Robinson and Liana Pappas as publisher.

Currently a quarterly publication, touch’s first and second editions each had a circ of 18,000. After closing on the third issue, Pappas says, “Our readers want more, so we’ll be looking at publishing touch bi-monthly.”