Time Inc.’s Cover Ads Cause Stir, But No Backlash
Move comes two weeks before company spins off from Time Warner. 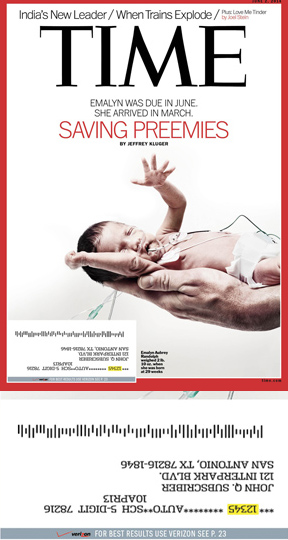 The nation’s largest magazine publishing company, which is set to begin publicly trading on the New York Stock Exchange in just two weeks, has been making bold choices in preparation of the move like effecting 500 layoffs and restructuring senior-level executives.

Time Inc. will run very small ads sponsored by Verizon Wireless on the covers of two of its top brands—flagship title TIME and Sports Illustrated—the next two weeks. Subscribers can find the miniature banner-style ad in the mailing label area that directs readers to a page where a traditional ad can be viewed, while newsstand copies will print the ad by the bar code only.

It’s so small that it’s practically unnoticeable. However, it’s something long considered inappropriate by publishers who prided themselves on the separation of editorial independence from the influence of marketers.

Ironically or not, ASME’s first editorial guideline for magazines is “Don’t Print Ads on Covers” citing the cover as “the editor and publisher’s brand statement.” It’s paradoxical as Time Inc.’s chief content officer Norman Pearlstine, a champion of the idea, is on the ASME board of directors.

"You can either say this is a groundbreaking decision to put ads on covers after 91 years in the business or you can say this is a relatively modest reference that catches up to what’s going on in the industry," Pearlstine, told Ad Age, who broke the story. "What we didn’t want to do is to be perceived…trying to hide from it."

Ad Age’s Michael Sebastian noted that cover ads would likely “both arouse consternation and encourage others to follow.” He also points to lags in revenue for the company as a chief reason why a move like this would be necessary and a big step for the struggling industry at large.

“The magazines’ recent ads, though seemingly innocuous, may herald the beginning of a new age in print advertising,” remarked New York Observer’s Madeline Berg. “Time Inc. is apparently considering running ads across the bottom of covers and in the table of contents, another spot long considered off limits.”

Money woes aside, not everyone is greenlighting this idea.

“You can go ahead and mark May 22, 2014, as the day magazine covers died,” wrote FishbowlNY’s Chris O’Shea of the cover ad decision. “Eventually magazine covers will look like NASCAR cars, completely covered in ads. It’ll be like a fun, sad game—try to figure out what magazine this is!”