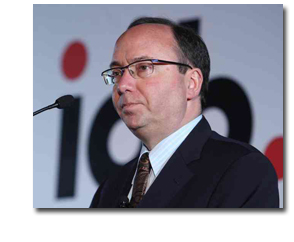 Jack Griffin, CEO of Time Inc., today announced that he’s appointed Randall Rothenberg into the newly created position of EVP, chief digital officer. Rothenberg, who will officially start in January and report to Griffin, joins Time Inc. from the Interactive Advertising Bureau where he served as its president and CEO.

Rothenberg [pictured] is being handed a wide range of duties, not the least of which is overseeing the company’s digital strategy. Within that, he’s charged with business development, including uncovering new revenue opportunities and potential digital acquisition targets.

He’ll also sit on the board of Next Issue Media, joining colleagues Griffin and EVP and general counsel Maurice Edelson. Still on that board, by the way, is Monica Ray, who joined Condé Nast as executive vice president of consumer marketing last summer. Prior to that Ray was Time Inc.’s senior vice president of corporate digital development. Her prior leadership role in Time Inc.’s digital initiatives is a vacancy that Rothenberg is now plugging up.

"Randall has participated in every aspect of the digital media marketplace-from content creation to marketing revenue-giving him a unique perspective that will be critical to his new position," said Griffin in a statement.

Along with his strategic responsibilities, Rothenberg will also be overseeing the creation of an internal digital incubator called the Center for Digital Innovation. Time Inc. employees and "others" will be given seed funding to develop new digital projects.

In the meantime, IAB is announcing that, as a search for a new CEO commences, executive vice president and chief operating officer Patrick Dolan will provide interim leadership for the association.