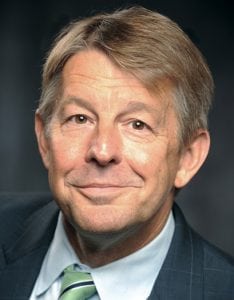 Longtime Billings Gazette publisher Mike Gulledge—who also serves VP of publishing at Lee Enterprises and regional publisher of the Missoulian and the Ravalli Republic—has announced his resignation from the company, effective Sept. 30.

Gulledge, who has been with the company since 1983, arrived in Billings in 2000 after spending two years as publisher of the Decatur, Ill.-based Herald & Review. He has been on medical leave since mid-summer, recovering from quadruple bypass surgery, and cited health concerns as one reason for stepping down.

“Although fully recovered, I have decided to take some time with my wife, Susan, to determine what opportunities are ahead for us,” he said in an announcement Tuesday.

Lee has tapped general manager Dave Worstell to succeed Gulledge as publisher of the Gazette, while the Missoulian and Ravalli Republic will be grouped alongside the Helena-based Independent Record and the Montana Standard under regional publisher Paul McArthur, who arrives at the company after four years at rival newspaper publisher GateHouse Media, most recently as SVP of sales.

Tyler Miller, who has served as regional publisher of both the Independent Record and Montana Standard since 2013, will remain in that role, presumably reporting to McArthur.

Gulledge is just one of three execs departing Lee Enterprises, whose 40-plus outlets serve markets in 20 states across the country. Don Rowley—who has spent a total of 23 years as publisher of the Arizona Daily Sun across two different stints, the latter of which began in 2003—separately announced his plans to retire at the end of the month, as did Marc Wilson, founder and chief executive of the online platform TownNews, of which Lee Enterprises has held a majority stake since 1995.

Wilson will transition to chairman emeritus and be succeeded by Brad Ward, who succeeded Wilson as CEO of TownNews a year ago. 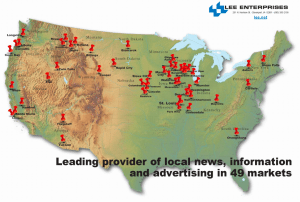 The departures come as Lee Enterprises attempts to reduce its debt—which it has slashed by 31 percent over the past three years but still totals nearly $500 million, according to its most recent earnings report—primarily by reducing headcount and printing costs. A number of its properties have undergone staff cuts over the past several months, including its largest newspaper, the St. Louis Post-Dispatch, where layoffs have become a regular occurrence over the past decade.

Elsewhere, the company is grappling with newsrooms attempting to unionize, as has been the case at the Southern Illinoisian, Wyoming’s Casper Star-Tribune, and the Missoula Independent, where Lee most recently followed through on its threat to shut down the paper entirely unless newly unionized employees agreed to let the company cut two-thirds of them, according to the staffers.

Staffers at the Casper Star-Tribune have repeatedly expressed distrust in Lee’s ownership and suggested that the April dismissal of features editor Elise Schmelzer, who was named Wyoming Young Journalist of the Year in 2017, was motivated by her support for the paper’s union. (Schmelzer was subsequently scooped up by the Denver Post, where she is now a breaking news reporter.)

In June, Lee Enterprises further expanded its portfolio of local newspapers when it reached a deal with Berkshire Hathaway to manage its 26 local newspapers, including Virginia’s Richmond Times-Dispatch and Nebraska’s Omaha World-Herald—which laid off 10 staffers and eliminated a further 13 positions two months later.