Study: How Successful are Journalism Grads After Graduation?
Three out of four journalism and communications grads left school with a job.

The University of Georgia has released its annual survey measuring the success of journalism and mass communications majors in finding jobs after graduation. The study found that about three out of four of those with bachelor’s degrees had successfully found employment upon graduation. 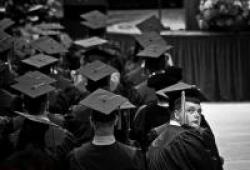 However, not all of these opportunities were in the field of the respondents’ majors. About 60 percent of bachelor’s degree recipients held jobs in the field of communications six to eight months after graduation, an increase from the previous year.

The study also found that journalism and communications graduates were more successful compared to others in the 20-24 year old age group. Journalism graduates had about a 10 percent unemployment rate, while the unemployment rate of the entire U.S. Labor Force aged 20-24 years old with bachelor’s degrees was about 14 percent.

The report stated that about a quarter of the bachelor’s degree recipients said that they regretted studying journalism and communications, similar to the past.

More female graduates reported having a full-time job than men in 2012, which has been the case historically. Also, bachelor’s degree recipients of racial and ethnic minority backgrounds had more difficulty finding work than other graduates. This gap has been consistent over time and was nearly the same as the previous year. Those minorities who were able to find a job were much less likely to find one in the field of communications than graduates who were not members of minority groups.