The State of App Advertising
Rich media ads have greater traction in apps than on the web.

In the heyday of print advertising, the rules seemed simpler. Competition from television, radio, and other forms advertising was a factor, but each medium was distinct—with its own attributes, value propositions, and measurements. The Web changed all that. Along with the suicidal dilemma of free editorial content, the Web brought in a whole new (and volatile) system of measuring success. Impressions,  “eyeballs,” and other metrics became a science—more or less—while the value of traditional display ads seemed to founder.

If early indicators prove true, the rise of multi-function tablets is about to change all that. Although lacking the screen real estate to fully bring back the visual impact of a full color display ad, tablets bring a different level of engagement to advertising. Advertisers are only just beginning to realize this potential.

Part of the transition is ruled by the market share of each channel. Today, print is still a very large percentage of the subscriber base—with a correspondingly high percentage an advertiser’s non-broadcast spend. However, tablet adoption is exceeding initial projections, which means that advertisers must embrace the potential of this medium a lot sooner than anticipated. 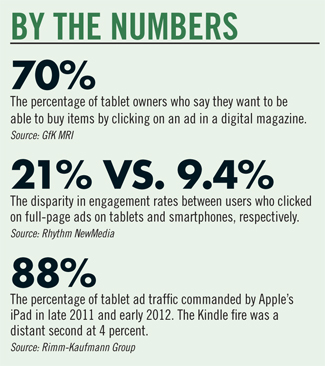 The App is Not the Web

Mobile apps, while heavily reliant on Internet connectivity, are fundamentally different from traditional, browser-based media. Unlike the wide-open, essentially borderless Web environment, apps are closed systems—each one a hybrid of device-resident software and media content. Some of that media may be viewable only when connected, but much of the content, and all of the navigation and functionality, are self-contained.

For publishers, this means greater control over the content experience—and far less dependence on browser capabilities or installed plugins. Not only can content be better protected from unauthorized use, it can also be made more interactive and responsive to the end user.

Many analysts have predicted that HTML5 will eventually bring publishers away from dedicated apps for Apple or Android and back to the browser environment. However, even when that happens, users will demand the rich, self-contained experience that apps deliver today.

For advertisers, the app experience offers multiple levels of engagement that were problematic on the Web—and impossible in print. Audio and video footage is the most obvious of these, ranging from simply repurposing TV ads to creating shorter original footage. Multi-photo galleries, panoramas, and 360° views are gaining in popularity as well. While all these rich media can be found on the Web, their use in apps seems to have greater traction, mainly because smartphones and tablets are primarily “touch” environments. Users are already tapping, pinching, and swiping the screen, so interacting with on-screen ad elements is already second nature.

What makes app ads even more engaging is the potential for including games or game-like modules. These can be simple—like quizzes, drawings, or contests—or sophisticated, animated widgets. They can also take advantage of the device’s built-in capabilities (MP3 player, camera, phone, gyroscope, GPS, whatever comes next) in ways that PCs never could.

Claudia Malley of National Geographic describes this level of app-based interaction as “a storytelling medium” that advertisers and sponsors have barely begun to explore. The device-app combination, she maintained, is a medium that gives each user the opportunity to know more, and therefore potentially buy more, by experiencing multiple levels of potentially customized information.

Advertiser interest levels are extremely high. However, “advertisers and publishers should not use traditional models for this new medium,” she says. Tablet interactivity is also not yet reflected in a standardized National Geographic rate card or other list of options, but it has become part of every new ad proposal.

Under current auditing practices, most print ads appear in the mobile app, although relatively few have availed themselves of the opportunity to augment or replace their print ad with something more interactive—at least so far. Mark Tavarozzi of Entrepreneur feels that advertisers are curious about the added value of app interactivity, but are still learning about the medium. The fact that mobile apps are paid for by subscribers—departing from the free Web content model—also fuels advertiser excitement, he said.

One feature of magazine apps that has garnered both editorial and advertising interest is the social media connection. Brand campaigns on Facebook and Twitter can, potentially, be extended to the app universe without taking the reader outside the app. Users of Adobe’s Digital Publishing Suite (DPS) can achieve this by creating Web views within the app page—a feature common to most app development environments.

We found that editorial efforts were further along in integrating social media with their app content, but that advertisers and sponsors were following close behind. In both cases, the social media component is also in the experimental stage, with app integration taking a slightly lower priority.

Another use of Web views—probably the most important of all for advertisers—is direct e-commerce. Increasingly, customized HTML storefronts are being set up, to be viewed and used directly from the app. (In most environments, a separate window containing the storefront is used. However, once the purchase is made, closing the window returns the user to the app.)

E-commerce is not limited to storefronts. Many publishers and advertisers are developing innovative ways to bring buyers and sellers together. In the new Alternative Press app, music reviews are accompanied by a direct link to the artist on iTunes, according to Director of New Media Robert Ortenzi. Revenue from songs purchased through this process is shared with the magazine, through a partnership agreement with Apple. Other commerce-enabling features are being planned for the magazine’s ads, which have featured integrated video from the advertiser’s Web site.

Perhaps the most challenging (and promising) aspect of app advertising is the need to develop a new ad currency. Declan Moore, President of Publishing and Digital Media at National Geographic, notes that existing metrics, such as rate base, impressions, and CPM, do not really measure the value of engagement with an interactive tablet ad. A new class of measurement standards is needed, he said.

Even with the current lack of standards, the early metrics for interactive app ads is impressive. Most of the publishers we spoke to cited metrics—from Adobe Omniture and other providers—indicating that users spent minutes, not seconds, on ads that facilitated hands-on interaction by the reader. All expressed the desire for more detailed data, including time spent with specific features in the app, as well as e-commerce sell-through and brand following trends in social media.

We found that the vast majority of ads are still facsimiles of their printed originals. This is due in part to auditing rules requiring content parity. It is also due to advertiser unfamiliarity with the medium. Enhancements to print replica ads are growing, slowly, as advertisers experiment with ways to induce readers to spend more time on the page. Fully enhanced ads—with a print counterpart, but clearly designed for the new medium—will become increasingly common as tablet market penetration approaches 10 percent of the subscriber base.

What will drive this trend faster is measurement of user engagement. Time spent with a brand, and especially time spent approaching or even making a purchase decision, will overturn conventional thinking about what an ad is—not just a story and a call to action, but a bridge to the action itself.