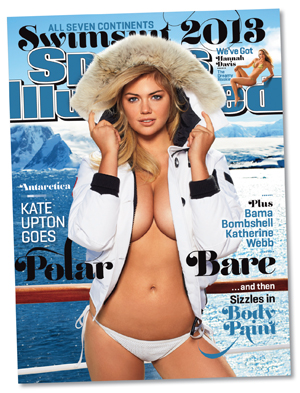 Sex sells. It’s an age-old truth that many businesses adhere to, and one that Time Inc.’s Sports Illustrated has used since it debuted its Swimsuit Issue in 1964. The iconic franchise, which is known for its hoard of scantily clad models, has come a long way in its almost-50-year history.

The franchise reaches more than 62 million adults annually, and more men aged 18 to 34 than the Super Bowl.  The Swimsuit Issue—which is much more than an issue—spans more than 20 product extensions across digital, social, broadcast, mobile and consumer products, and reaches 40 million more readers and users than a typical issue. Sports Illustrated has not only built a franchise, but a pop culture sensation.

“It’s become a full experience that’s complimented everywhere and we give the user the choice of where and how they’d like to access it,” says Paul Fichtenbaum, editor of the Time Inc. Sports Group. “We’ve always had ambitious thoughts for the Swimsuit Issue, and every year it gets bigger and bigger.”

Brand Spin-Offs Emphasize Engagement
The print Swimsuit Issue is just one part of the brand’s platform. This year, the franchise spans more than 12 devices, and the tablet edition, which is free to current subscribers, includes over 75 high-definition videos and offers users an interactive 360-degree look at the models. The mobile app also includes an interactive game, Swim IQ, which provides a trivia quiz on the models—users can earn points and unlock exclusive videos and photos.

Online, a dedicated landing page at SI.com allows users to see images from each photo shoot location and vote for their favorite rookie model for a chance to accompany a crew on a forthcoming Swimsuit photo shoot. The website drives traffic through a live-streaming component where models and editors provide teasers of content, as well as select interviews, all with an exclusive advertiser in tow.

The franchise is extended to television through a partnership with the Travel Channel, which offers a behind-the-scenes program of the magazine’s photo shoots, as well as sit-downs with the creative director, edit staff and exclusive model interviews.

The Swimsuit franchise also rolled out with its own social media campaign—there is a dedicated Twitter page and handle, Facebook page, Instagram feed and Google+ page for the issue to help extend the buzz of the brand year round. When the issue launched in February, Google+ hangouts were used to further extend touch points—Swimsuit editors, rookie models and cover girls conducted live Google+ Hangouts with fans.

Selling the Phenomenon
“In 1985 we were doing calendars, licensing deals, retail programs and we did an event where we went to each city and brought the models,” says Mark Ford, president of the Time Inc. Sports Group. “When looking back, the Swimsuit Issue was really the first multiplatform product that we thought of, and not just from a content or editorial standpoint, but a business standpoint as well.”

The Swimsuit Issue is building its business and it isn’t just a boys club anymore, either.

“We’ve tried to broaden our reach and appeal to women as well because they’re just as interested in seeing what we do in terms of fashion,” says Fichtenbaum. “Our issue is more fashion forward this year and has been trending in that direction because we want to reach and appeal to as many people as we can.”

Ford adds that the brand has seen the number of women reading the issue grow because many view it as a catalog for jewelry and fashion, which has lead to the addition of new advertisers like Target and Cover Girl.

“As the edit product evolves into a bigger, more global phenomenon that reaches a wider audience, the business side is able to use that reach to help itself,” says Ford.

Ford says that the brand has one dedicated person working on Swimsuit sales year-round, though the whole ad sales team assists with securing sponsors and advertisers. This year’s Swimsuit Issue brought in close to 99 ad pages and is on sale at retail until May—it is by far the brand’s most coveted issue by advertisers and readers alike, despite the increased cover price of $6.99.

The 2013 Swimsuit issue saw its ad pages increase by about 25 percent, from 78.66 pages to 98.28, according to Min Boxscore numbers—the brand’s biggest single issue. Ford says there are no bundled ad packages sold for the issue because of the high exposure, and each element—from tablets and print to social and online—are priced individually in an ‘a la carte’ type of way.

Year-over-year, the number of tablet single-copy issues sold has grown by about 60 percent and the title sells about 800,000 hard copies on newsstands. In all, the Swimsuit Issue accounts for about 10 percent of Sports Illustrated’s total revenue.

The Swimsuit Issue has become so popular among fans that SI has launched a daily companion website to extend the editorial—and advertising—experiences. While fans clearly love looking at the swimsuit models, they also like to know about them, which is where SwimDaily.com comes in. The online site incorporates updates about the models in their everyday lives—from photos from their Instagram feeds to Q&As with models to posts on their makeup tips to throwback stories from years passed.

“We recognize that people love the Swimsuit Issue all the time and we thought that it could live everyday,” says Fichtenbaum. “We wanted to launch this daily blog and it’s so far been a smashing success. It’s more personal, and readers can get to know the models much more intimately. It proves the power of the Swimsuit Issue—users can’t get enough.”