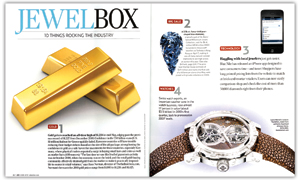 Business-to-business publishers are going one of two ways when it comes to their remaining print magazines; slashing budgets and staff to the bare bones or investing in print as a premium offering.

Those choosing the latter route are increasingly turning to expertise from the consumer world. Reed Exhibition’s JCK, which unveiled a new design in June, tapped art director Robert Newman, former design director of consumer titles Real Simple, Fortune and Details, to lead the makeover, which included adoption of a large format (10×12), new sections and openers and heavier paper stock.

The new issue (produced by custom publisher TMG, which retained much of the original JCK staff) boasts a 240-page folio and a 48 percent increase in ad pages to 120.

FOLIO: spoke with Newman about what b-to-b magazines can take away from consumer titles.

1. Package The Magazine
With JCK, Newman oversaw an effort that completely remade the magazine from design to paper stock to editorial approach. “There is no denying that b-to-b magazines know their stuff,” Newman says. “But traditionally they’ve been weaker at what consumer magazines are good at, which is packaging. Before the recent economic downturn and shift away from print, a lot of b-to-b magazines didn’t have to worry about packaging. Now it’s more of a challenge and, like consumer publishers, they really have to sell the magazine.”

Use the magazine architecture to let people know where they are at all times, Newman says. “The editors re-imagined the front of book so instead of one traditional opener they came up with five or six new sections such as business, fashion, news. Each section has its own color palette and each has a very strong opener with use of white space and logos on every page to break up the sections. Even within sections we are very aware of the spacing so it’s not essential to have little things everywhere. Each section is a mini magazine where you use different texture and pacing.”

2. Create A Sense of Value
JCK’s new oversize format and heavier paper stock is reminiscent of W. “We’re creating a sense of luxury and value with the magazine,” says Newman. “Fortune recently increased its size and paper stock, which is the direct opposite way things have been going. The idea is people will continue to read the magazine if we make this more of a keeper product. JCK is arguably the type of magazine a retailer will leave in the store. Before it was not necessarily one you’d show customers or leave out. It’s a cool kind of tool people in stores can use day-to-day.”

3. Differentiate Advertising from Editorial
One of the problems with b-to-b magazines is that the advertising is not quite as glamorous or as well designed as in consumer titles. “Many of the ads are designed by the advertisers themselves and not to criticize but sometimes they aren’t very elegant,” Newman says. “Partial-page ads—half page, two-thirds of a page—are often a challenge for the editor. Use white space to separate ads so it’s clear and clean. If every b-to-b magazine adopted a rule that you had to have a quarter inch of white space between ads and edit, I’d be a much happier man.”

4. It’s Better to be Clean Than Clever
Newman says many b-to-b magazines have excellent design, such as McGraw-Hill’s Architectural Record and Greensource. However, he also recognizes that most b-to-b titles don’t have the budgets of their consumer peers. “You don’t need design that’s award-winning or edgy or even creative but you do need a design that is orderly and structured and clean at a minimum,” he adds. “The reader needs to know where they are at all times.”

5. How Do Readers Read The Magazine?
One of Newman’s biggest pet peeves is the editorial assumption that all readers read the magazine the same way and they do it cover-to-cover. “It’s no shame to say a third of your readers skim the magazine. Your job as a responsible editor or art director is to deliver a package of whatever they want, even if they only read the captions. People does this so brilliantly—every photo has a caption. Some magazines don’t do photo captions because they figure, ‘Oh it’s in the story.’ If you could, go to people’s business and watch how they read magazines—where do they read it? If you’re JCK, how many retailers read the magazine at the counter?”

6. White Space Is Your Friend—Stop Trying To Jam So Much On One Page
One of the biggest problems with b-to-b design is trying to do too much on one page, according to Newman. “More is not always better—readers are very busy and overworked, they don’t have a spare moment,” he says. “What they really want is for your magazine to curate a little more, not deliver everything. Allow more space in the magazine.”