Ecommerce has become an oasis for many publishers looking to diversify revenue streams in a downward ad market.

And while Time Inc.’s Sports Illustrated Golf Group has outperformed the industry in advertising—its flagship, Golf Magazine, saw a year-over-year 12-percent gain in ad pages, according to PIB—it’s the latest brand to integrate purchasing options for consumers.

Through partnerships with golf equipment retailer, Golfsmith, and a tee-time booking provider, Play18 Solutions, Golf.com will roll out buying opportunities for its readers later this month.

Dick Raskopf, publisher of the SI Golf Group, says the Golfsmith deal will be based on revenue, in part, but adds that they’re also partnering on marketing. The new arrangement is an expansion of an existing relationship.

Interestingly, Golf.com had featured a home-grown ecommerce portal in the past, but Raskopf says Golfsmith’s brick-and-mortar stores—they have retail locations in 28 states—offer a significant advantage over that system.

"They provide us a back-end," he says. "But they’re not just an online solution. They offer both online and they have brick-and-mortar stores. It just gives more flexibility to golfers to transact completely online or if they want to go in-store to take advantage of a promotion or trading in a club."

As with several other sectors—gaming and shelter titles, chief among them—the ecommerce initiatives put the Golf Group in the position to review the inventory they’re selling. It’s a potential conflict that already exists with advertisers, but Raskopf is adamant that the relationship between his brands and the vendors will be limited to hosting only. They’re simply providing a portal for readers to do what they were going to do anyway.

"We review material all the time," he says. "We’re just providing a depth of service to make it easier for consumers to access information." 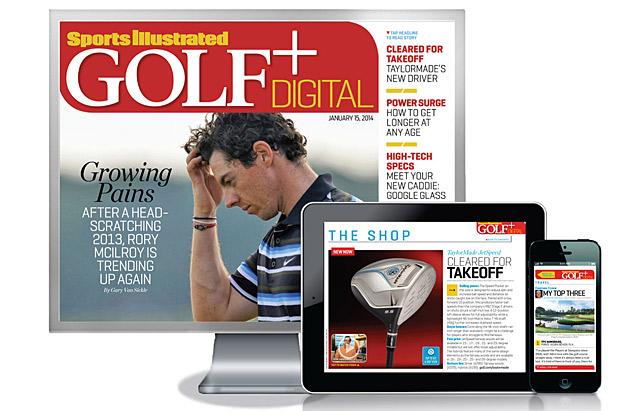 Along with the introduction of the ecommerce initiatives, the SI Golf Group also announced the launch of a weekly digital magazine, Sports Illustrated Golf+ Digital.

The first edition of SIGPD offers a little more than 30 pages of original content, with a mix of text, images and video. Advertisements also employ a range of multimedia.

Accessible via browser on a desktop or in a native app on a device, the magazine’s layout is medium-dependent.

"Whether you’re looking at it from a tablet or a smartphone, it was all designed for each creative medium," Raskopf says. "Each format was [customized], so you can imagine a lot of the design work that was done."

The app is available for free on iOS devices.