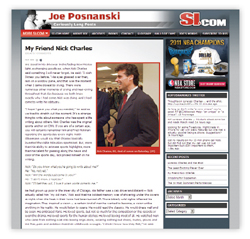 Everyone knows blogs are supposed to be short, punchy, witty, link-driven and if possible, snarky, right?

While SI columnist Joe Posnanski’s covers most of those bases, “short” might not fit. Hence the name “Curiously Long Posts,” which also refers to the freedom Posnanski has to roam both sports topics and broader subjects.

The name riffs on the idea of this being an “anti-blog,” says Paul Fichtenbaum, managing editor of SI.com. “It’s not a conventional blog, where most work is in short bursts. Joe likes to talk, and the name gives you an indication of what you’re getting into. It is a nod to an old-time columnist; it’s a nod to the old way in a new format.”

While Posnanski’s posts run the gamut from the Penn State scandal to a 3,000-word diatribe on the snuggie, it’s a winning approach for SI.com. “That blog gets more traffic than any of our other blogs, hands down,” Fichtenbaum says. “It’s by far the blog that gets the most conversation and that’s because Joe has built up this community around what he writes.”

One of Posnanski’s best-known posts was a piece analyzing the best covers in Sports Illustrated’s history. “That touched everyone here in personal ways, everyone has their favorite SI coverage,” says Fichtenbaum. “It generated an enormous amount of coverage on the blog and that one stands out as one of the most commented and well-regarded blogs.”