The story of shrinking magazines and fewer ad pages is anything but new. However, the lack of transparency in data reporting for print magazines leaves a lot of unanswered questions about how thin things really are.

Given that we are no longer able to track and accurately report on ad buys in print, we decided in 2015 to monitor some of the top fashion magazines in the industry by weighing and measuring them to create a new, albeit less-scientific dataset, so we could get a better idea of how mass-consumer fashion magazines are performing year-over-year. Four years in and the narrative is not a surprising one: things aren’t looking all that good. 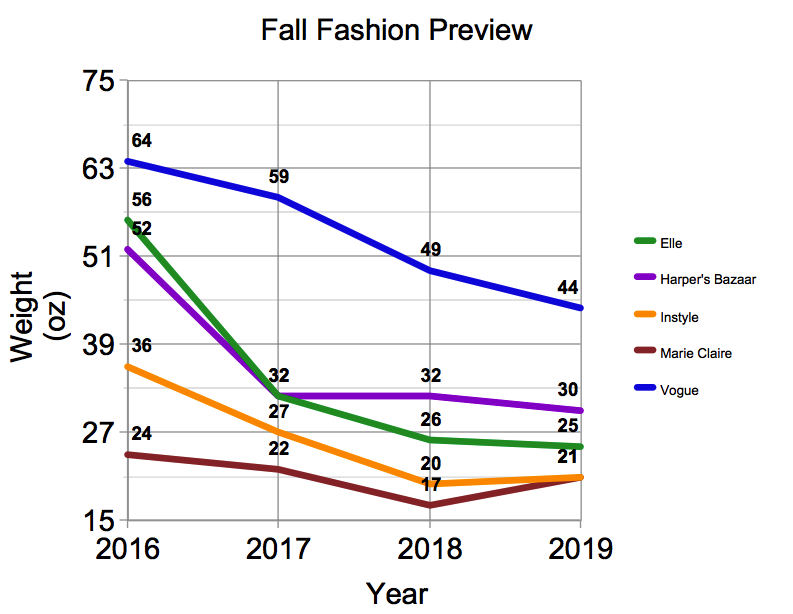 Since we began this project, we have seen Glamour and People Style Watch fold their print magazines. Porter cut its frequency back to two issues a year, which prompted us to remove it from the dataset. And we decided to also remove Allure altogether since it was less than half the size of the second smallest book.

But beyond that, we have seen significant shrinkage across the board over the past four years—including at Vogue, where its “thud factor” has decreased by more than 30% in that time. But the good news for Vogue is it’s still the clear leader of the pack, but nobody in the set is immune to the industry’s challenges and bucking the trend.

The “best” performers this year were those who remained relatively flat versus last year. Still, for InStyle and Marie Claire, remaining flat shouldn’t warrant any pride, considering they sit at the bottom of the stack, so to speak.

But rather than dive into these numbers too deeply, since we provide the graphs for you here, let’s quickly look at the five magazines themselves. 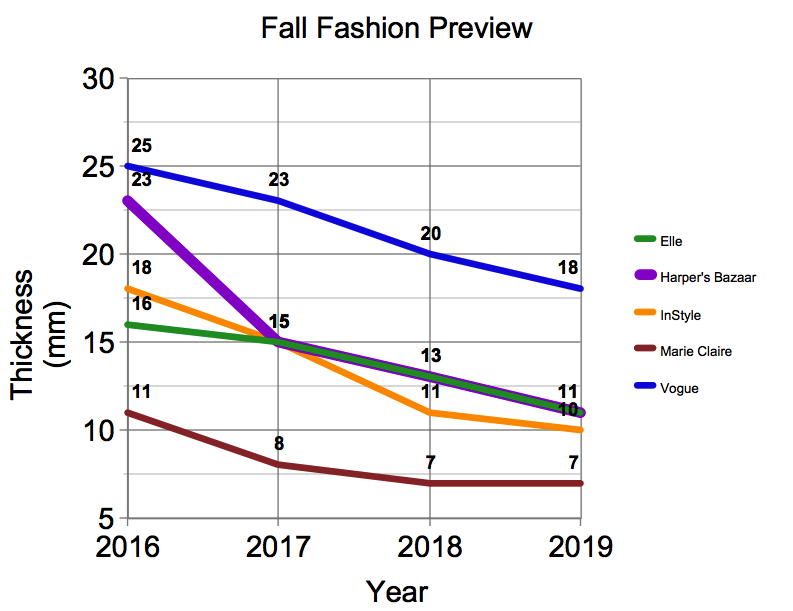 First of all, without nuance, four of the five magazines really want you to know this is their Fall fashion issue. The cover lines include “It’s Fashion, Baby” from InStyle; “The Fashion Issue” from Harper’s Bazaar; “The Power of Fashion” from Elle; and “It’s the September Issue!” from Vogue.

Cover lines are intended to create excitement to sell magazines, but such explicit appeals to sell fashion in a fashion magazine arguably diminishes the trendy, exclusive character that these books built their reputations on. But this is a minor critique compared to a more glaring concern on these covers.

Take a look at all five covers and you will see four of them all have something very familiar in common: a total lack of diversity (unless you count hair color). Last year we saw we saw considerably more diversity across the dataset. However, this year Alicia Keys is the only person of color to grace the cover of one of these magazines. This isn’t merely a social consciousness problem. Magazines desperately need to tap into younger, more diverse audiences if they want to grow and sustain their brand strength.

This is especially true in the social media era, where your magazine cover probably means more on Instagram than it does on the actual newsstand. It’s possible that Julianne Moore or Angelina Jolie will prove to have decent sell-through rates, but how will they help grow InStyle and Elle’s brand equity on digital platforms? It’s somewhat of a rhetorical question for now, but one that these magazines have to consider more carefully as the September issues continue to shrink and account for less and less annual revenue.

The point I’m trying to make here is that fashion magazines don’t seem to be trying to do anything differently, and are still resting on their laurels. The problem with that is our data suggest that what used to work clearly isn’t working anymore. None of us should expect a comeback story here. But what we should hope for is that these magazines start thinking about their publications and their audiences differently.

We will do this same report next year. We expect there will be more decline. So our question now is: how much longer will this report be relevant before the once-dominant September looks like every other issue a magazine publishes?

Each magazine was weighed on two scales to confirm accuracy. Weights are then rounded to the nearest ounce. Additionally, each spine was measured in the middle of the book and rounded to the nearest millimeter. Because trim sizes and paper stock are not uniform, we measure both weight and spine thickness to offer a more fair comparison.