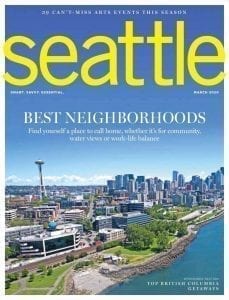 The 54 year-old monthly has been acquired by local entrepreneur Jonathan Sposato, co-founder and chairman of the tech site GeekWire.com and the online photo editing service PicMonkey, he announced Monday.

The seller, Minnesota-based regional magazine publisher Tiger Oak Media, which has owned the magazine since 1999, filed for Chapter 11 bankruptcy protection last October, reporting at least $2 million in debt owed to vendors and other creditors.

Contacted via email, Sposato declined to share the terms of the deal but suggested that Tiger Oak’s struggles did not extend to Seattle magazine, specifically, describing it as “absolutely sustainable and with great upside.”

Sposato, who grew up in nearby Edmonds, Wash. and began his career at Microsoft, says he plans to invest in the publication’s digital presence and hire additional writers, photographers and salespeople, while maintaining its existing staffers, adding that he is “absolutely” committed to maintaining its monthly print edition.

“Frankly, they’ve all been working so hard, producing an outsized amount of content on a monthly basis,” he tells Folio:. “I deeply respect how hard they’ve all worked and I want everyone to stick around as I also add more resources.”

Seattle magazine traces its roots back to Pacific Search, the natural science journal launched by Harriet Bullitt, daughter of King Broadcasting Co. founder Dorothy Bullitt, in 1966. The publication was renamed Pacific Northwest in 1980, gradually expanding its lifestyle coverage and earning a General Excellence nomination at the National Magazine Awards in 1982. It changed hands three times in the two decades that followed, sold by Bullitt to New Jersey-based Micromedia Affiliates in 1987 and again in 1992 to California-based Adams Publishing, where it took on its current name before landing at Tiger Oak, the publisher of Seattle Bride, seven years later.

A spokesman noted that Seattle Bride was not included in this week’s sale to Sposato.

In its 2017 media kit, the most recent one available, Seattle magazine claimed 139,000 unique visitors to its website each month, and on the print side, an average monthly circulation of 47,000, 87% of which was paid. It primarily competes with Seattle Met, a 10x frequency title published by SagaCity Media, which reaches a similar-sized print audience according to data from the Circulation Verification Council.

And although nearly all of the companies he’s founded, operated or invested in live squarely in the digital space—as Monday’s press release notes, he’s “the first entrepreneur to have sold two companies to Google”—Sposato tells Folio: he believes there’s still a place for print media.

“There will always be a very human desire to curl up on the couch with a beautiful, glossy magazine with inspiring photography and writing that moves us,” he says. “As it turns out, people are still buying magazines.”

Updated Tuesday, March 3 at 11:47 am with input from Jonathan Sposato.