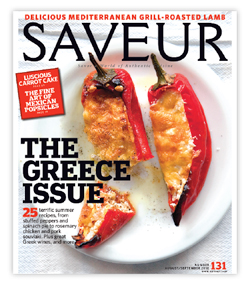 A strong cover conveys the gist of an entire issue in one shot. It also needs to drive strong reader interest in that issue, especially in the crowded food magazine market, in which mouth-watering shots of delicious dishes are standard.

Saveur’s cover image for the August/September 2010 issue, dubbed “The Greece Issue,” did both. “It all starts with the image,” says art director Dave Weaver. “It has to be delicious, makeable and artful. With this issue it was rather easy: Greek food is a favorite of our readers so it came down to finding the right dish. As always, we tried several images—but there was nothing as powerful as the red peppers.”

Saveur is no stranger to the winner’s circle when it comes to its cover. It’s August/September 2009 “The Burger Bible” cover was a finalist in the “Most Delicious” category of the American Society of Magazine Editor’s fifth annual Best Cover Contest.

For the August/September 2010 issue, executive food editor Todd Coleman was traveling in Greece shooting for the issue and came back with images of hundreds of dishes. “This one, however, really captured the bold, dynamic nature not only of the issue itself but Greek food,” says Weaver. “Typography was easy—big. ‘The Greece Issue’ was as much as a selling point as the image.”

And how did it fare with readers? “This was one of the best-selling Saveur issues ever,” says Weaver.