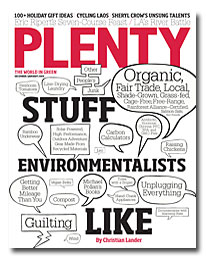 Earlier this year, cash-strapped “green” consumer magazine Plenty and its companion Web site folded. Now, PlentyMag.com has been acquired by the Mother Nature Network, an environmental news and information site.

As part of the deal, Plentymag.com’s RSS feeds will be re-channeled with MNN content. MNN will begin producing a Plenty version of its own newsletter to send to Plenty’s former e-newsletter subscribers.

MNN will create “environmental content similar to the best items that we had at our site and making it available to you,” Plenty publisher and editor-in-chief Mark Spellum wrote in an e-mail to subscribers, which was posted to the MNN site. “No one wanted to see the demise of Plentymag.com but we feel lucky to have found a media partner who recognized the strong readership and content that we and you produced.”