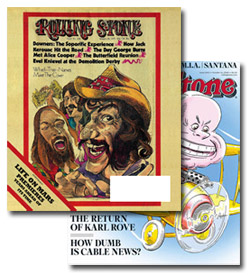 Rolling Stone, which will make its historic move to a smaller trim size on October 30, has made a bit of history with its final oversized issue, too.

Some 1.3 million copies of the October 16 issue were sent to subscribers wrapped in a faux cover promoting Life on Mars, the new ABC-TV series, recreating a 1973 Rolling Stone cover.

Last month, Wenner Media announced that after months of market-testing, Rolling Stone would indeed switch from its large-size format (10 by 11 and ¾ inches) to a more “rack-friendly” size typically found on the newsstand, moving from saddle-stitching to perfect-bound format. In doing so, the magazine plans to upgrade its paper stock and add 16 to 20 pages per issue.

While rare, this is not the first time Rolling Stone has sold a cover wrap to an advertiser.

Meanwhile, the magazine has rolled out its own trade ad campaign, both online and in print, touting a “remastered” Rolling Stone with its October 30 relaunch.