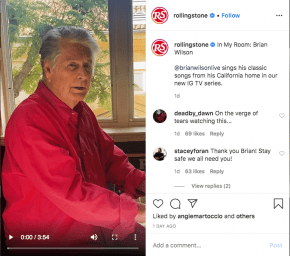 As the world continues to grapple with its temporary new normal, Rolling Stone wants to make sure its readers, and music fans, don’t miss out on their spring and summer concert plans.

In an effort to leverage its access to musical artists across genres, the Penske Media brand launched an IGTV concert series, “In My Room” on March 18. New episodes will debut every Monday, Wednesday and Friday. The first featured Beach Boys front man, Brian Wilson, at his piano, singing his hits.

“We have the opportunity to bring the Rolling Stone community together and foster greater connection between our fans and the artists they admire most,” president and COO Gus Wenner tells Folio:. “They can still experience the joy of music with a community of people, including artists they love. That’s what we’re trying to convey to fans, and that’s where our focus is right now.”

After one episode, the company purported that 24-hour viewership was 70% higher than its average video views across social platforms (Instagram, Facebook and Twitter). But despite the high engagement, monetizing the series is not a priority for the time being.

“Right now we’re focused on sharing songs from different artists around the globe with our consumers to give them some much needed entertainment and glimpse into how the creative community is dealing with this crisis,” Wenner says. “As this platform builds, we’ll discuss working with partners who similarly believe that music brings people comfort, and provides a welcome distraction and powerful message during a stressful time in our society.”

Wenner would not get into specifics on which artists are slated for their own episode of “In My Room,” and instead would only say, “We have a very eclectic lineup that includes established and emerging artists, across generations and just about every genre, including hip-hop, country, and Latin.”

Although this immediate response to the COVID-19 outbreak was crafted with readers in mind, Wenner says “In My Room” has long-term value for all of its stakeholders.

“The music industry is suffering from the implications of COVID-19 right now, but the impact of this crisis won’t end when COVID-19 does,” he says. “Because of that, we’re encouraging viewers in the write-ups on RollingStone.com to not only purchase merchandise of the artists we feature, but to support all musicians undergoing financial hardship by giving to the Sweet Relief Musicians Fund.”