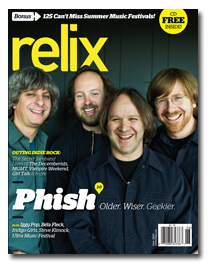 Relix magazine was launched in 1974 as a handmade fanzine for Deadheads.

Now, it’s returning from the dead.

“I thought there was a good chance we were done,” Josh Baron, Relix’s editor, told FOLIO:.

Financial terms of the deal were not disclosed. (Zenbu is said to be in discussions to sell its metal magazines; the planned launch of a new country music magazine appears to have been scrapped.)

Relix, with a frequency of eight-times per year, carries a circulation of 102,000. The Web sites, Relix.com and Jambands.com, carry even more.

For the magazine’s fans, the relaunch comes at a heady time. The 92-page June issue, redesigned by Andy Turnbull, features the rock band Phish—returning from its own hiatus—on the cover. And ad pages, at least for this particular issue, are actually up over last year.

“This is a scene that’s healthy,” said Shapiro, who owned a minority stake in Zenbu before he bought Relix and remains Bernstein’s business partner on a number of other projects, including the Green Apple Music Festival.  “Live music isn’t going anywhere. And with record stores closing, more and more musicians are selling music directly to their fans—the magazine is a mechanism to reach them.”

Such ads “lend themselves to Relix more than Rolling Stone,” Shapiro said, adding: “We don’t have six ads from Detroit in every issue.”

The economy has not been kind to general interest music magazines—or niche ones, for that matter. Blender, No Depression, Harp, Resonance, CCM, Mass Appeal and King have all folded their print titles within the past two years—while others appear to be on life support.

Shapiro—who once owned Wetlands, a famed New York rock club and produced the Jammy Awards, the jam-band equivalent of the Grammys—says he wants to create the “vibe of Rolling Stone in 1974”—both in terms of editorial coverage and, perhaps more importantly, “corporate” culture. (He pointed out that his first day in the office included a live performance by the Dears.)

Relix will remain in Zenbu’s Manhattan offices, subsidizing it by renting the space vacated by Metal Edge and Metal Maniacs to small, like-minded entertainment companies, including Bob Weir’s manager.

Shapiro will serve as publisher of the newly-formed Relix Media Group, Seiden as associate publisher. Baron will remain in the top editor slot.

All are veterans of the magazine—and all are taking salary cuts, roughly 15 percent, to relaunch Relix.

“If we didn’t see a real business value, we would’ve walked away,” said Baron. “This isn’t a case of putting a Band-Aid on a magazine. We think we can increase ad revenue, circulation, marketshare. What we had been doing for the last eight years—we weren’t done yet.”

Help on the Way?