Reflections From My Not-So-Romantic Stint in the Magazine Business
My early lesson in how not to succeed in media. 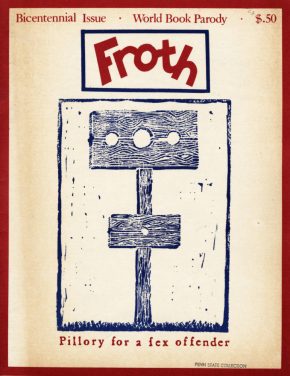 Yeah, I was in the magazine business before you were. Probably.

This was from 1973 to 1977, a gentler time when baseball uniforms were double-knit and Nazis had the decency to cower in South America and Good & Plenty was a household name. It was a time, dear reader, before Photoshop. Before social strategy. Before a single cover Kardashian. Way the f*** back, in other words.

In those days, I was an undergraduate at King’s College Oxford…or, wait, I may be mistaken. Perhaps it was Penn State. Yes, come to think of it, it was Penn State. I’m now remembering ag barns and a sainted football coach and a great deal of Little Caesars pizza and rows of state-constructed concrete residential blocks, in one of which I either studiously devoured the canon of Western literature or drank Busch quarts and played street hockey in the study lounge.

Anyhoo, early in my freshman year I learned that the venerable old college humor magazine Froth—a remnant of the ’20s, resurrected in the ’50s, re-resurrected in the ’60s—was being re-re-resurrected. Whoa! This was for me! I harbored tweedy, man-of-letters aspirations (I’d already begun affecting a pipe, which looked super sophisticated on my sturdy 6’1” 130-pound physique) and a magazine seemed to be just the ticket. I submitted a piece that parodied an Eisenhower-era guide to social hygiene for teens, titled it “Dr. Lance Boyle’s Guide to Life and Love,” and very soon I was a published author. The spoof was actually pretty dead-on, in a disgracefully vulgar, adolescent sort of way. I’d say it was sophomoric, but I didn’t achieve that until the following year.

Not only did I get several articles and a couple of cartoons into the first two issues of the revived Froth, I was immediately named an associate editor, because I was by far the most qualified candidate among the zero other people seeking the position. Furthermore, the top editors were graduate students, in their last days on campus, and—long story short—by the fall of 1974, I was the editor-in-chief of a real honest-to-God magazine. I was also the publisher, art director, production manager, advertising director, traffic coordinator and distribution director. And, of course, prolific contributor.

Not to blow my own horn, but I brought a tremendous amount of energy to all of these roles and managed to publish fall and spring issues for each of my four years. Imagine how successful this humor magazine might have been if I also been…funny. There are only a couple of jokes I can even remember. One was an illustration in the Lance Boyle article, captioned: “Roller skating is a fine idea for a date.” The couple in the cartoon was wearing skates, but they were busy in a different activity. I also recall our epigraph in the masthead of the second issue: “I felt sorry for myself because I had no shoes, until I met a man who had no socks.” That still kind of makes me laugh. But, all in all, there were many more laughs in the Harvard Lampoon.

All in all, there were many more laughs in the Harvard Business Review.

But we’re not here to lament. Truth be told, I can’t say why you are here at all. For myself, I’m thinking about what may have been. Because in addition to being obsessively devoted to every aspect of magazine publishing, I was far ahead of my time. This was the ’70s. All around me the magazine world was flourishing. Iconic titles launched spinoffs, and sometimes spinoffs of spinoffs. (The details are fuzzy, but I seem to remember Teen National Review and Vogue SVU.) Yes, heady times. And yet, in the space of less than four years, almost singlehandedly, I ran Froth into the ground.

House & Garden, George, Spy, USA Weekend, eat your hearts out. I was there first. Furthermore, I did so before the internet was even a notion, much less a thing. No sirree. No digital disruption; I failed strictly analog. This is what pioneers do. Upon my graduation, Froth was returned to the crypt for another 20 years. I grabbed my diploma and skedaddled, with no unpaid bills but also, as far as I could ascertain, no disappointed readers, either.

Dare I call myself a visionary?

Thing is, I still had the bug. I had a dream of founding my own title: a fresh, sophisticated compendium of commentary, culture, politics, literature and humor. Sort of half The New Yorker, and the other half also The New Yorker. Alas, nobody seemed to understand my vision, probably because they weren’t prodigies such as myself. Or perhaps because I was an imbecile.

In these I was a mainly an ad hoc contributor, but thanks to my deep roots in the industry, and my prodigious instincts and, I suppose, my priceless experience….

…some of them are dead, too.