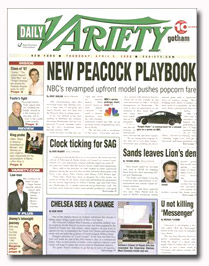 London-based Reed Elsevier is said to have allowed first
round bidders for its trade magazine publishing arm, Reed Business Information,
to re-submit their bids last week.

The re-submission, which wasn’t officially the second round,
was permitted because certain bidders "felt they were not provided with enough
information" on RBI during the first round, a Reuters news
report said.

It was not immediately clear what that information was, nor
which group re-submitted bids. A Reed Elsevier spokesperson could not
immediately be reached for comment.

The new bids came in "slightly lower" than in the first
round, the report said.

According to DeSilva + Phillips managing partner Reed Phillips, allowing re-submitted bids is a bit "unusal," but the move enabled the bidders to put together "a more precise expression" of their interest.

Last week, German publishing group Gruner + Jahr, which made
a dramatic exit from the U.S.
magazine market in 2005, confirmed that it had entered
the second-round bidding war for RBI. UBS, the bank that’s organizing the
RBI sale, is said to have invited more than 10 groups, including McGraw-Hill
and private equity firm Bain Capital, to submit their
second round offers.

In releasing its first half financial results, Reed Elsevier
last month said it expects the RBI divestiture to be
complete sometime within the second half of the year. The value of the
original first-round bids was said to have ranged between $1.87 billion and
$2.33 billion.

RBI publishes a number of trade magazines including Variety and Publishers Weekly, Reed Elsevier announced in February that it was putting RBI on the block.