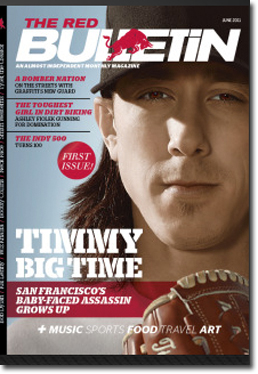 In an attempt to bring the success of the energy drink to their media branch, Red Bull is taking branded content to another level. The Red Bulletin, a monthly periodical of original content based on the “Red Bull lifestyle”, includes features on Red Bull-sponsored athletes, as well as other extreme sport and musical coverage.

The Red Bull Media House, a media division of the Red Bull brand, began The Red Bulletin in fall 2007 in Austria. The Bulletin was then launched in Germany, the U.K., Ireland, South Africa, Kuwait, New Zealand and Poland. Other offerings include a TV channel, a production studio, mobile content and a Red Bulletin iPad app.

The June 2011 issue marks the first American issue, with an editorial note penned by Red Bull founder and CEO Dietrich Mateschitz. The glossy mag will be distributed on newsstands the second week of every month, as well as on the third Sunday for select subscribers of major regional newspapers across the country.

According to CNBC.com, Red Bulletin has a circulation of 1.2 million; for some perspective on this number, ESPN The Magazine distributes only twice that amount. 12 issues of The Bulletin can be bought for a discounted price of $12.00.

Available for purchase at $4.99, The Red Bulletin has the same newsstand price as the In Style magazine currently lying on my desk.

Companies have long created magazines to reflect a lifestyle that their brand promotes. American Express has its own publishing arm; luxury brands Cartier and Hermes have given branded magazines a go. Denim line Acne releases Acne Paper biannually, with their Winter 2011 issue marking its 11th edition; a past issue of Acne Paper is priced at $15.00.

The table of contents begins, “Welcome to the world of Red Bull,” and listed sections include one called “Bullevard”. Each pagination is accompanied by the logo found on the energy drink’s can, and it appears on 64 of the 98 pages in the magazine.

Not every athlete, celebrity and musician seen on the pages of The Red Bulletin don a Red Bull logo, but enough do that the reader never forgets what company publishes the mag.

As for the magazine itself, the photography is beautiful; the action shots in particular work well on the page to illuminate the extreme lifestyle The Red Bulletin is attempting to capture. The content seems well-researched, though many of the closing paragraphs feel a bit clichéd.

Since brands began to cross into the content world, publishers have remained skeptical. The bar seems to be lower for quality content; after all the companies spearheading these magazines aren’t publishers, right?

However, if a reader is expected to pay the same price (or more) as they pay for other publications, it’s only fair that they expect the same standard of content. Besides the battle of carving out an audience as a new publication, The Red Bulletin is faced with weighted skepticism from its peers and potential readers weary of a magazine-length advertisement.

We’ll have to wait to see if The Red Bulletin will sprout “wiiiings”, or if it will set another failed example of a brand treading into territory it doesn’t fully understand.