Reality Check: Symbolism and Nostalgia Are Not Business Models
Why we’re having the wrong conversations about print’s future.

Apologies for what follows. You’ve caught me staring in the face of the devil.

That’s one of the things I’m staring at. The other is a big stack of New Yorkers. Unthumbed-through. It’s 15 issues deep.

Not for the reason we all sometimes have magazines piled up. It’s not that I’ve squandered time watching “The Bachelor.” It’s not that they’re unread. No, it’s that they’re unnecessary for the same reason that my expensive camera is stowed in some closet and my alarm clock is dusty and I no longer have a travel agent or Yellow Pages or even a single folding map. 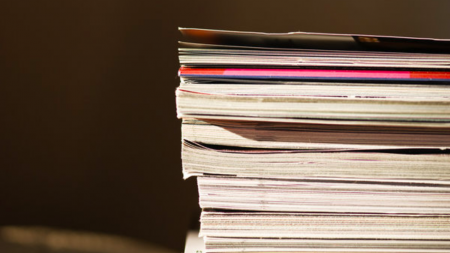 Because, come on, I have a phone. And, as the back issues of the New Yorker pile up, Jane Mayer and Jill Lepore and Ronan Farrow come to my Android unassisted by the postman. They arrive very presentably, too, and because they are mere pixels, they don’t clutter the coffee table.

But you knew that already. Obviously. I don’t pretend to be offering any news here. Digital disruption is not a breaking story. Changing behaviors, obsolescence—they’re all too familiar; along with the rest of industry reality.

As readers of Folio: are only too well aware, magazine newsstand revenues are down by two-thirds in the past dozen years. Print circulation drops year after year, like the Times Square Ball or a washed-up, middleweight prize fighter. Time Inc., Wenner Media, Rodale…remember them? Condé Nast is making money doing fashion videos. And I shall not desecrate the dead by naming them here. It’s the never-ending story.

And yet that unthumbed pile is so eloquent. Why?

That’s not a rhetorical question. After all, the New Yorker is an outlier in several ways. First, of course, it is an icon: the best American magazine that ever was—and amid the current violent schism of American society, doing the best work it’s ever done. Eustace Tilley, however reimagined with post-modern irony, stands for intellectual aristocracy in the best sense. Secondly, quality and prestige have never rendered it exactly a profit engine. It’s reputedly (and surely no more than marginally) profitable at the moment, but for its 35 years under the Newhouses, and long before that, it has mainly been a loss leader: equal parts vanity publication and ongoing act of noblesse oblige. And, thirdly, thanks to the other edge of the double-edged digital sword, it’s enjoying the greatest reach it’s ever had.

Aha! That third thing. Therein lies the answer to the question. That’s the subtext of the ever-growing stack. The pile is, itself, an icon. A symbol. A tangible reminder not just of times gone by, but of an enduring and self-destructive lie that reach is somehow a business model.

We have long since learned throughout the world of publishing that incremental growth multiplied by fractional CPMs is a race to unsustainability. The outlier New Yorker may be the noble exception, but it’s the exception that proves the rule.

And I think that is what screams at me. When I see those stacked issues, I don’t see the New Yorker’s Eustace Tilley. I see everyone else’s Black Knight, arms and legs lopped off, bleeding out, a tragic (and preposterous) symbol of hubris and denial.

After a recent circulation-data dump documented the latest grim news, for example, some industry consultants concluded that as publishers continue to acquire more eyeballs across platforms, the decline of print is being offset. And that it’s actually the “holistic” business that will sustain the industry through uncertain times.

You just have to update your buzzword glossary. Holistic (adj.): unhinged from revenue reality.

The question is, when does reality begin to dictate behavior? I mean, elsewhere in the disrupted analog world, markets adapt. There are no travel agents anymore, are there? Map publishing scarcely exists. And the camera stores, at least the ones all over Manhattan…they mainly sell souvenirs and game consoles and luggage and, um, phones. Isn’t that what businesses do—react to changing conditions?

Sure, let’s agree that the paper edition of the New Yorker may be less sadly and expensively vestigial than every other title still rolling off of presses. Maybe that particular cart makes sense pushing that particular horse. But the rest of the herd? Does the expansion of digital audience augur a promising future? Does the premium for print ads versus digital justify the enormous cost of ink, paper, freight and postage? Is there anything in the marketplace that offers the slightest cause for optimism or argument for clinging to analog tradition? Of course not.

So, yes, the New Yorker does it again. Even by just lying there, the greatest of America’s magazines unflinchingly delivers the truth.