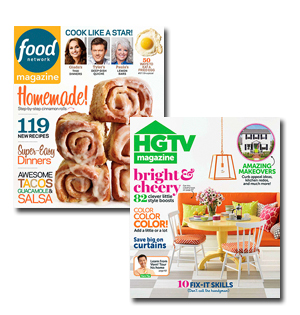 Hearst’s TV-tied brands are seeing their rate bases jump again.The company announced Tuesday that Food Network Magazine will see its 11th consecutive rate base increase since officially launching in 2009, with sister title HGTV Magazine increasing its rate base for the third time since launching its first official issue in June 2012.

Hearst publishes these titles in a partnership with Scripps Interactive Networks—the HGTV and Food Network channels are distributed by Scripps to almost 100 million households.

“Very rarely do we explicitly copy or interpret a show onto the pages of the magazine,” John Loughlin, EVP and general manager of Hearst Magazines, told FOLIO:’s supplement Audience Development (AD) in February 2012. “The magazines that we create in partnership out of television activity have the look, feel and essence of the television brand but in no way are they imitations of it. They break new ground and broaden the experience for the consumer.”

See Also: On the Tube and On the Page: Television-Branded Publications

HGTV Magazine first went to market with a test issue in October 2011—at the time, the publication had a rate base of just 450,000. Similarly, Food Network Magazine, which launched its first official issue in 2009 and was the first joint venture between Hearst and Scripps, has seen similar success, boasting its seventh rate base bump by the summer of 2012, with its 11th to come in 2014.

“It’s one thing to tune in once a week and say ‘I like this show’ but it’s another thing to say I like this brand enough that I will spend $18, which is our introductory price on Food Network Magazine,” Loughlin told AD.

Partnering with a television network has its perks when it comes to promotion. HGTV Magazine generated 25,000 orders after 15-second and 30-second commercials aired on the channel. Promotional messages about the publications also appear on the bottom of the screen during television programs. According to Loughlin, the overall viewing size of the audience, instead of ratings, is what really maters.

“There is not a hugely tight correlation between day-to-day, week-to-week or period-to-period ratings and the circulation of the magazine,” Loughin said to AD. “Consumers who are watching television proactively tune in on a Tuesday, might not on a Wednesday and come back to it Saturday—it’s really about the consumer’s discretionary time. Consumers order a magazine or pay for a magazine and that’s the key differentiator, the fact that they’re paying for it. It also comes once a month, and because it doesn’t have the same kind of shelf life that an episode of Iron Chef or Oprah’s former daily television show, studies have shown consumers come back multiple times. The reality is there isn’t a tight correlation between ratings and circulation.”