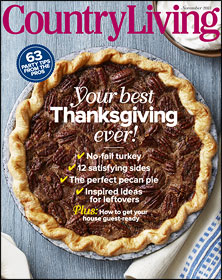 In an unusual move on Oct. 14, Hearst Magazines president (since June 2010) David Carey announced the hire of Southern Living executive editor (since 2010) Rachel Hardage Barrett as Country Living editor-in-chief and, with it, the 10-times-a-year CL’s editorial department will eventually be joining Barrett in Birmingham, Ala.

The city is home to SL and several Time Inc. Lifestyle Group magazines (Coastal Living, Cooking Light, etc.) as well as Hoffman Media, but Hearst Corp. did not have a magazine, newspaper or television presence there. min is told that Carey had intended to relocate CL editorial into an area more "country" than New York, and when Barrett emerged as the top candidate, Birmingham became the city of choice.

Per AdAge.com, Barrett will be a frequent flyer between Birmingham and New York during a staff transition that is not expected to be completed until March 2014. None of current CL staff members will make the move.

Also departing is Barrett predecessor (since Nov. 2008) Sarah Gray Miller. Ironically, Miller, who led Budget Living to a National Magazine Award during her 2002-2005 stint at the late Don Welsh’s startup, is from Mississippi.

Barrett’s pre-SL career was in New York at Glamour and Real Simple, where she rose from staff editor to deputy editor over seven years.

Barrett becomes just the fourth editor-in-chief in CL’s 35-year-history after Rachel Newman (1978-1998), Nancy Soriano (1998-2008) and Miller. During the 1980s and 1990s (before the 2000 launch of O, the Oprah Magazine), the 1.6 million rate-base CL was believed to be the third most profitable magazine at Hearst after Cosmopolitan and Good Housekeeping.