Publishing on the Cloud
How cloud computing is changing the potential of online publishing. 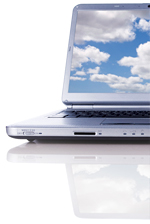 IF THE TERM “open source” has defined many online publishing efforts in recent years, “cloud computing” may dominate the next several years. Observers continue to argue over what “cloud” means but broadly it refers to virtual servers that can be set up quickly and in many cases used on-demand (many publishers already use services that could be considered cloud-based, like Salesforce.com). Short-term, that means big time and cost savings for building Web sites. Long-term, the cloud could dramatically alter traditional publishing services such as newsstand reports and fulfillment.

Consumer publisher Future US uses two of the major cloud providers in Rackspace and Amazon EC2. “You can pay for your servers by the hour,” says Mark Kramer, director of Internet technology and operations. “We use this like a utility—we only pay for what we need when we need it. There’s nobody to call, I can provision more devices at any time and I can turn them off at any time since I’m not locked into a contract.”

Future US has seen a 75 percent reduction in hosting costs since moving to the cloud. “We’re talking hundreds of thousands of dollars a year,” says Kramer.

In addition to cost savings, Kramer says the cloud offers increased agility. “In the past (and I mean within the last two years), when you rolled out a Web site, you’d either have a data center you were paying for monthly, or you acquired servers or leased them from a hosting provider,” he adds. “If you have fluctuations of seasonal traffic—say you do lot more at Christmas—when you design for capacity, you’re thinking about the most traffic not the least but you’re going to be paying for the most even if you’re not doing it every day.”

The cloud, on the other hand, follows an on-demand model. “With the cloud, you can come to me and say, ‘I need three servers set up,’ and I can go to the Rackspace server, press four buttons and in five minutes those servers are set up,” says Kramer. “I didn’t have to call anybody in IT to help me, I don’t have someone sitting in the data center dealing with this, I can just start working.”

That increased agility is especially helpful with custom projects for Future’s customer publishing and marketing group, Future Plus, which recently teamed with Best Buy to launch @Gamer, a magazine available by subscription and at all Best Buy locations in the U.S.

“The subscription marketing infrastructure we manage for Best Buy came together within three or for weeks,” says Future US president John Marcom. “In the old days this would have required months of testing and planning, as well as having to go find capital to buy new equipment.”

Managing traffic spikes via the cloud has been especially effective for UBM’s TechWeb, which has an aggressive events strategy (both live and virtual) and uses cloud-based servers for Web sites that complement shows, such as the Games Developer Conference, which drew 18,250 attendees. “Cloud servers can run sites for a few moments or a few days, then we can shut them down again,” says David Michael, CIO and executive vice president of global technology. TechWeb uses Amazon and GoGrid.

Many publishers may already be leveraging cloud-based services without being aware they fall under the “cloud” umbrella. “There is a lot of ambiguity about what ‘cloud’ means,” says Michael. “We use Salesforce.com—that’s a cloud application, it’s delivered over the Web. Prior to using that, we did what everyone else is doing, which is use a premise-based solution running on our servers. It was a real material benefit when we made that switch four years ago.”

Sales Management: “All databases run in a single instance across all of e.Republic,” says COO Paul Harney. “Our company has a number of different sales teams, but each customer is housed in Salesforce under one account.  This allows for sales teams to share information to help coordinate overall company sales efforts.”

In addition to the traditional CRM, e.Republic has moved in-house fulfillment into Salesforce for all of publications, newsletters and event registrations.

“With five publications, more than 20 newsletters and close to 200 events annually, it allows us to know how each member of our audience is engaging with us and tailor marketing and product information to their needs,” says Harney.

Marketing and lead generation: All marketing automation for all e.Republic brands is done in the cloud via online marketing platform Eloqua. “All of our touch points for our audience are run through Eloqua forms,” says Harney. “These forms flow seamlessly into Salesforce where the data is housed and can be sliced for marketing purposes.”

e.Republic has seen cloud platforms provide a huge benefit in out-of-the-box functionality and quick time to market. “In an instant we gained features like robust form creation and centralized list management that would have taken months if not been impossible using previous in-house systems,” says e.Republic Web marketing manager Zach Presnall. “Now we have 10 different Eloqua experts who each have the ability to create targeted e-mail campaigns using a pre-defined design, blast to a specific list and track results (in the same day). This would have taken two to four people previously, none of which had expertise in e-mail marketing. With 10 experts, as a team we are smarter about audience development, use of e-mail and continuous improvement based on results.”

Content Management: All Web site content management for e.Republic is done in the cloud via enterprise CMS Clickability, according to Harney. “This allows our editorial staff to share content across publications,” he says. “It also puts changes to the Web site in the hands of editorial and marketing staff instead of IT personnel, speeding up implementation of ideas and allowing the IT personnel to focus on the heavy lifting.”

Cloud-based services are starting to offer more affordable solutions as well. “A lot of the services every publisher can leverage now would have been cost prohibitive a few years ago,” says Kramer. “Everybody struggled with video encoding but now there are a lot of low cost video encoding solutions that are low cost because they run on a cloud infrastructure.”

In addition to cost savings, both Michael and Kramer say one of the biggest benefits of going to the cloud is freeing up personnel to work on building new products. “This has allowed us to free up internal resources that were looking after servers, building internal software, and put them on to doing others things,” says Michael.

e.Republic has seen savings in administrative man-hours of upwards of 200 man-hours per month across the enterprise.

“We have reduced our IT staff by 25 percent through attrition,” according to Harney. “New Web projects have seen the time from inception to completion cut dramatically.

By knowing that changes can be made quickly and by many people, e.Republic says its staff is empowered to test more concepts on the Web to find out what works and what doesn’t.
“Marketing costs have dropped as we are better able to deliver specific messages that convert our audience faster,” says Harney.

Transitioning to the Cloud

For e.Republic, the transition to cloud systems involved the consolidation of seven different databases including sales, marketing, e-mail, registration and circulation.

“We worked with Bluewolf and DemandGen on the initial launches of Salesforce.com and Eloqua, but the bulk of the work and administration has been done internally by non-IT staff,” says vice president of marketing and business process automation Drew Noel. “Our more savvy staff has been able to do most of the development with minimal support from IT. We have a single universal database across our company for all subscribers, advertisers and the interactions between them and each and all of our brands.”

Still, the biggest challenge for e.Republic lies ahead in combining the power of its systems and putting in heavier integration.

“This will take the work back into the IT department, but will definitely result in a unified cloud-computing structure that will be greater than the sum of its individual components,” says Noel.

Drawbacks with the Cloud

Kramer agrees and says that while Future US is planning to eliminate the budget for most of its Internet hardware in 2011, it still requires hardware for its data center and other internal systems. “But when we’re specifically talking about public-facing Web sites or online apps it doesn’t make sense for us to have even our development and staging environments internally anymore,” he adds.

Cost savings with the cloud also don’t really kick in until the publisher has reached a certain amount of scale with what it’s running on the cloud, according to Michael.

“We’ve been moving to the cloud with our smaller Web sites,” he adds. “There are a lot of challenges with it—it’s hard to run databases, you need to be aware of security and you have to modify your software to work in the cloud. Still we have made savings and had operational improvements and we anticipate over time that we will make significant cost savings.”

Future US sees the cloud having a big impact on emerging publishing services such as tablets and e-readers, as well as some traditional staples as well, including magazine reporting and fulfillment.

“In the magazine industry, there are a lot of old, creaky processes in the way fulfillment has traditionally worked or the way publishers get intelligence about what’s happening at retail,” says Marcom. “Hopefully, the benefits of the cloud approach will permeate through those services in the near future as well. We’re also starting to see systems that produce content on multiple platforms and a lot of that will take place in cloud-like environments. The actual upfront investment to turn a magazine into an iPad app will be quite trivial by time this is all done.”