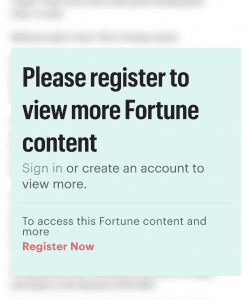 Visitors to Fortune.com noticed something new over the past few weeks: a requirement to enter an email address in order to access content.

“You’re paying for it with your email address in a sense,” says Fortune‘s chief marketing officer, Michael Joseloff. “We have done a lot of research into what will be most valuable for our audiences, and this is a chance to test some of that in advance of our official paywall, which we will put up in early March.”

While the site will still offer some content for free, it will also create three tiers of paid content, priced at $5 per month (or $49 per year), $11 per month (or $99 per year) and $22 per month (or $199 per year). The paywall is a new initiative at the now-independent magazine, which was sold by Meredith Corp. to Thai-based businessman Chatchaval Jiaravanon for $150 million late in 2018. (Time Inc., which had published Fortune for decades, was itself acquired by Meredith earlier that year.)

“We’ve always been part of larger-scaled media organizations,” Joseloff says. “This gave us a chance to think about what’s truly the best model to serve our customers and deliver the right value to them.”

Fortune isn’t the only publisher to see paywalls as one way to continue moving away from an over-reliance on advertising and embrace the subscription business model. Just this month, The New Republic launched a metered paywall of its own, following similar shifts last year by Texas Monthly, New York magazine and Quartz.

The industry has had a love-hate relationship with paywalls and meters for at least two decades—with many publishers putting up paywalls only to tear them down again and then restart the process a few years later. But building paid content into a significant, self-sustaining business requires scale, and publishers are looking at innovative ways of generating it.

Those who want to build out a subscription base should focus their efforts on readers who already visit the site regularly, frequently open newsletters, and access content on multiple platforms, says Matt Skibinski, reader revenue advisor at the Lenfest Institute for Journalism, because all of those actions indicate an engaged audience, which is more important than the size of the audience itself.

“There are cases where smaller, niche publishers have a really high conversion rate and have enough of a digital subscription business to be meaningful,” he says. “Even though their overall audience pales in comparison to larger brands the people who access their content use it in their everyday lives, consider it valuable, and feel a strong affinity to it.”

Some of the latest iterations of paywalls involve dynamic subscription models. Similar to airlines, which vary the price of tickets depending on individual flyers’ habits, dynamic paywalls adjust the the number of articles a reader can access before hitting the paywall, as well as the price of the subscription they’re offered, depending on their specific consumption habits.

Women’s Wear Daily, which has kept some of its online content behind a paywall for nearly 20 years, will be implementing a dynamic paywall in the next few weeks, says Paul Jowdy, the publication’s chief business officer and publisher. For example, readers who are coming primarily for B2B content will hit the paywall more quickly and will be less likely to be offered a discounted subscription than those visiting the site for fashion and party coverage.

The site will also identify those who are only coming to the site for celebrity-oriented coverage. For these casual readers, the focus will be on feeding them similar stories rather than selling them a subscription at all.

“Now I’m building traffic on the site, which I can monetize,” Jowdy says. “I’m not getting subscribers, but I’m using those viewers for as much as I can gain. They’re never going to subscribe.”

Growing a subscription business successfully requires an understanding that you’re never going to be able to convert every user.

“Instead, look at what you do best,” Jowdy says. “See what content you deliver that’s valuable and unique and that no one else is doing and cut that piece out of the pie and make a subscription out of it.”

That’s the thinking behind a new subscription-based newsletter WWD is also launching this week, Beauty Inc., a weekly extension of the beauty-industry focused print publication of the same name, which WWD will continue to publish six times a year. After beauty articles consistently outperformed on the site, WWD realized it may have sufficient demand for a standalone, paid product.

At Beast Inside, the subscription platform launched by The Daily Beast in 2018, the content that has proven most profitable behind the paywall is political commentary.

“That’s something our readers want from us,” says chief revenue officer Mia Libby. “They want more of it. They want varied types of it, and they’re willing to pay for it.”

The site has also seen loyalty from the readers of its royal family coverage, though the two groups don’t have much overlap. The site relies on segmentation of its paying audience to make sure that it’s delivering the most relevant content to those readers.

Newsletter readers have proven to be among the most likely to pay for subscription products, says Libby, so Beast Inside focuses its marketing efforts on them, often offering a one-month trial for free or $1 to convert to a $4.99 per month or $35 annual membership.

“We find that once we get the people in, they get hooked on the subscription,” Libby says. “We want to give them the opportunity to test out the product and make sure it’s something they like. We’re asking, ‘How can we become part of their habit so that we become something they don’t mind paying for because it’s part of their daily life?’”

At Vox Media, New York magazine also offers a free one-month trial before attempting to convert readers to a $50 per year (or $5 per month) digital subscription. Occasionally, the publication runs discounts, offers meant to entice readers that might be more price sensitive. Offers for subscriptions come via the website, emails and social media.

Once readers are paying for a digital subscription, the focus shifts to keeping them happy with their experience. That may also include special offers, such as discounted event tickets, aimed at “surprising and delighting” subscribers, Sylva says.

“We listen closely to our members through on-site satisfaction measures, surveys, focus groups and other qualitative and quantitative measures,” he says. “We also regularly visit our member support call centers for listening sessions. These inputs, in turn, drive product and content strategy and help us quickly identify and address customer pain points.”