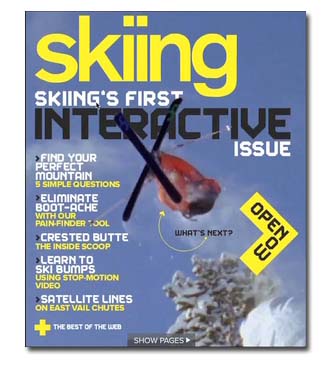 At a time when magazine publishers are racing to market with applications for tablets and smartphones, Bonnier Corp. and Interweave have launched new digital products specifically for viewing on desktops and laptops.

As part of the magazine’s broader “360-degree multiplatform initiative,” Bonnier’s Skiing magazine has developed Skiing Interactive, a digital edition with unique content and advertising that was developed specifically for accessing on a computer. Each issue will include features like a navigation scroll bar at the bottom, high definition cover videos, interactive maps and ads that allow users to click through for additional product information.

Each issue also will feature a “Best of the Web” section that includes user-generated videos, stories and photos that is aggregated by the magazine’s editors. “All the best stuff you normally find on Web sites, we’re going to get it all together and put it here in one place so you won’t have to spend hours looking around the web to see what’s cool,” Bonnier Enthusiast Group director Tom James says in a video announcing the project. [Scroll down to see the video.]

Bonnier has 10 editions of Skiing Interactive lined up, the first debuting in late fall. A Bonnier spokesperson says the company is still weighing different pricing models and subscription plans.

Separately, Loveland, Colorado-based enthusiast publisher Interweave has launched Quilting Arts in Stitches, a digital product (they’re calling it an “eMag”) that, as with Bonnier and Skiing Interactive, the publisher says is a “much more immersive experience” than traditional e-books or digital magazine editions.

“This is not a magazine or an app or a digital version of a magazine,” Fiber Division vice president and publisher John Bolton says. “Quilting Arts Magazine readers have been accustomed to digital issues of our print magazines for several years, but this is an entirely unique digital product unlike any we’ve been able to deliver before.”

Edited by the staff of Quilting Arts Magazine, Quilting Arts in Stitches will include video demos and interviews with artisan quilters, slideshows with zoom options, downloadable and printable patterns and hyperlinks to other content. It will be available for purchase in Interweave’s e-commerce Web site for $14.97 per issue.