Publishers: Let’s Get Real About Regulating Facebook
At our expense, Mark Zuckerberg's grand experiment has become The Sociopath Network; it's time for action.

Yeah, that situation with the Parkland graduate was appalling. Here’s another Harvard kid who should have been sent packing: Mark Zuckerberg.

Fifteen years ago, the entrepreneurial undergrad  was emailing a friend about the harvest of his proto social network, “The Face Book.” As revealed a few years back by Silicon Alley Insider, the exchange was illuminating:

Zuckerberg: Yeah, so if you ever need info about anyone at Harvard, just ask. I have over 4,000 emails, pictures, addresses, SNS

Friend: What? How’d you manage that one?

ZUCKERBERG: People just submitted it. I don’t know why. They “trust me.” Dumb fucks.

Nothing has changed since. Except the environment he has laid waste to.

Facebook has been a serial abuser of trust for its entire history. It has allowed mercenary and prying hands—including Cambridge Analytica—to invade our privacy and then hid its own culpability. It engineers algorithms to manipulate human behavior in the direction of actual addiction. It profits handsomely—and by design—from the flood of phony, dishonest, demagogic speech that literally drowns out reasoned debate. It has constantly made unilateral changes in its relationships with both users and media “partners.” And, along with duopoly twin Google, it has sucked 25% of the revenue out of the global advertising economy, crippling the rest of the media industry.

Under the cover of Pollyanna drive about “connecting the world,” Zuckerberg has been a social-media sociopath, exploiting human frailty with malice aforethought to profit and dominate. He wanted to move fast and break things, and he has succeeded.  He has broken the media economy, and he has broken the world.

For which Mark Zuckerberg apologizes.

“I’m the first to admit we’ve made a bunch of mistakes,” he said in 2011, just as he’d said in 2010, 2009, 2007 and 2006 over various corporate errors and outrages. I’d say it’s a tic, but that would be too generous. It’s a strategy, often expressed as “It’s better to ask for forgiveness than for permission.” Facebook has never been a big one for permission. Which is why the apologies keep coming, culminating in the mea culpa to end all mea culpas over the Cambridge Analytic scandal and associated privacy breaches that Facebook not only facilitated but counted on in its relentless Sherman’s March to digital domination:

“We have a responsibility to protect your data and if we can’t then we don’t deserve to serve you.” 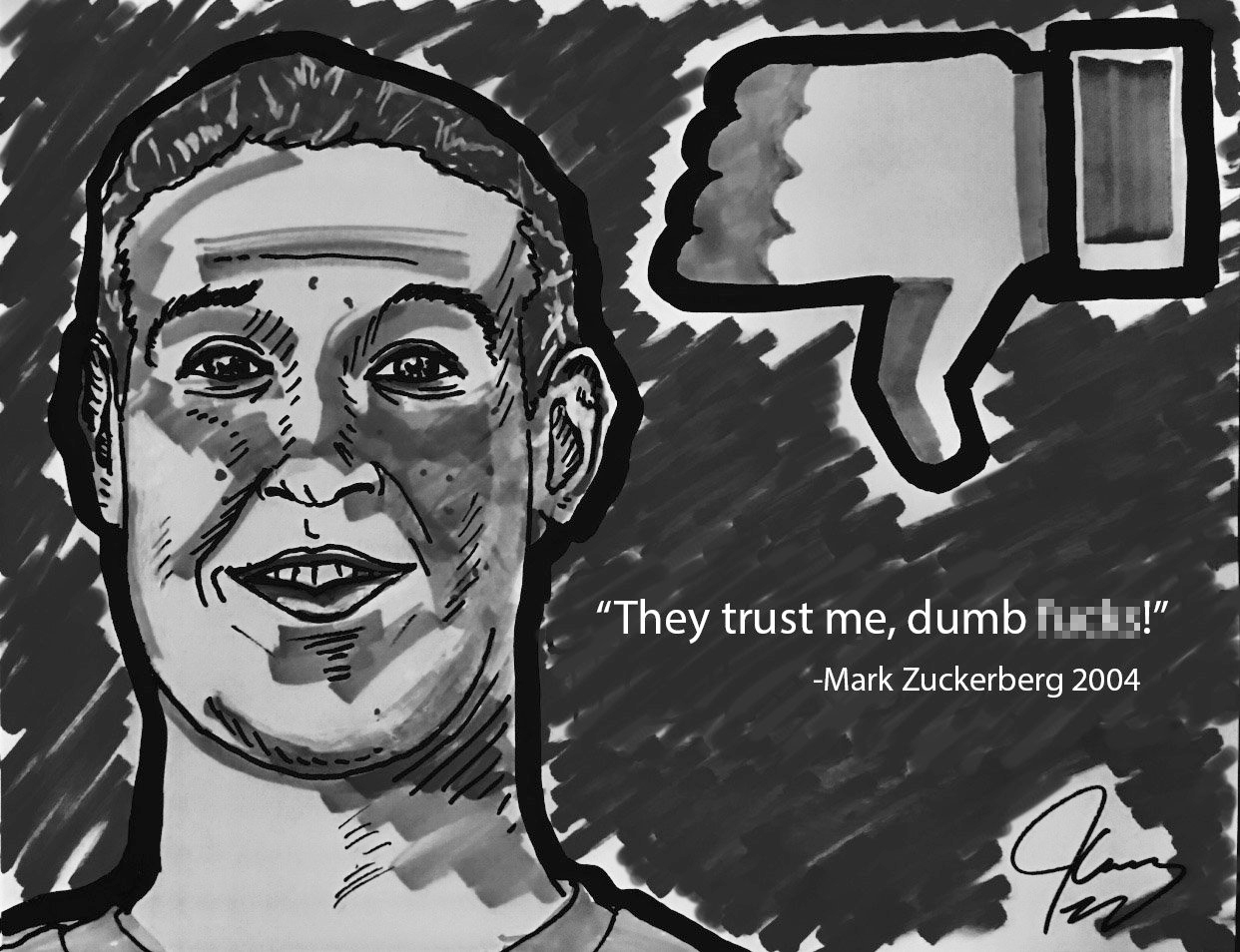 And so now come the calls for regulation and/or antitrust intervention. What a splendid idea. The fact that Zuckerberg himself has invited some level of regulation of social-media platforms is prima facia evidence of panic, intending it would seem to reduce pressure and the risk of far more extreme measures, such as wholesale breakup. That might mean not only separating Instagram and WhatsApp from the mother ship, but separating the ad business from the platforms themselves.

Public opinion and high-level criticism are working against Zuckerberg. Presidential candidate Elizabeth Warren, scholar Tim Wu and even Facebook cofounder Chris Hughes have all argued for putting the jackhammer to the thing. What militates in Zuckerberg’s favor is longstanding antitrust doctrine. Since the 1970s, the prevailing measure of excessive marketplace power is the cost, in dollars and cents, to the consumer. Since the consumer pays nothing in hard currency for using the platform, the legal status quo suggests there is no case for breakup.

But now comes the ascension of a competing doctrine, which aims to upend laissez faire and replace it with a different standard, one which reckons “cost”–not to mention actual predation—in a way that reflects modern digital reality. They call it the New Brandeis Movement, in honor of anti-trust’s father, the late Supreme Court Justice Louis Brandeis. They also call it “Hipster Antirust,” which is less beard/tattoo/gingham than it sounds. Instead, it redefines “consumer welfare” far beyond out-of-pocket expense.

Can we agree that having your personal data shared with scoundrels and having the entire media ecosystem collapse and selling fake-news ads to Russian intelligence and being murdered in Facebook-instigated pogroms is not conducive to any consumer’s welfare? Oh, I think we can. Furthermore, Carnegie Mellon University scholar Alessandro Acquisti points out, because our time, attention and information are immediately monetized by the platform for ad sales, “Collectively, as consumers, we are paying the bills with hard cash from our pockets.”

But, in any event, can we also agree that if you’re a publisher and have been lied to and baited-and-switched and short-changed on revenue share and pumped for data while being denied data back in return and generally disintermediated by a company with a depraved disregard for the consequences of its actions, you will not be all too put out to see economic justice at long last imposed?

So here’s a suggestion for the Department of Justice, the Federal Trade Commission and Congress: Dudes, move fast and break things. Because once it’s clear that such intervention is otherwise inevitable, Zuckerberg will have no choice but to break up the company himself—to retain some control of his future by spinning off what antitrust action would dismantle by force. Ask Kaiser Wilhelm; it’s always better to negotiate the terms of your surrender than have them imposed upon you.

Meanwhile, in other sociopath news—that kid who lost his Harvard acceptance from plastering the N-word and “kill all the fucking Jews” on social media? He has apologized.