Lifestyle Publishers Are Experiencing an E-Commerce Boom
As more consumers took up cooking and at-home fitness in March and April, affiliate commissions flowed.

Generally speaking, surges in online traffic during the pandemic have not translated to commensurate revenue growth for consumer-facing publishers, of whom an overwhelming majority anticipate a decline in digital advertising this year as marketers are forced to cancel, adjust or delay campaigns.

While carefully laid plans to pivot to paid content are emerging as a saving grace for some outlets, particularly those that specialize in news, lifestyle brands are seeing a major lift in revenue driven by e-commerce transactions, most often through the use of affiliate links embedded in product recommendation roundups that have come to be known as “commerce content.”

“Since the world began sheltering in place in mid-March, we saw sales similar to the height of the 2019 holiday season, which is our biggest time of year,” says Emily Silverman, senior director of e-commerce and partnerships at Hearst Magazines. “Every single title across the portfolio has seen an increase in e-commerce-driven product sales.”

In March. Hearst’s brands helped generate approximately one-million product sales in through commerce content, a 143% increase over March 2019, Silverman says, adding that April sales were pacing 358% ahead of 2019 as of last week. 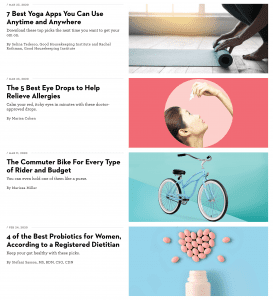 A selection of product roundups from Good Housekeeping.

In particular, e-commerce sales at Good Housekeeping were up 567% over the past six weeks, compared to the same period in 2019, Silverman said, while at-home fitness is driving huge gains for Men’s Health, where e-commerce sales are up 546% over the same period. Cosmopolitan (up 388%) is also seeing a boost, Silverman says, particularly around at-home grooming and skincare.

“We’ve continued with our core strategy: create content that’s highly relevant to what our readers need, stay nimble and quickly respond to what addresses the changing world, and always make it easy for our people to take action,” Silverman says. “One of the top commerce stories on Cosmo right now is about at-home laser hair removal; not the most sexy topic, but an essential service the Cosmo reader needs guidance on with her usual salons and services unavailable.”

Andy Wilson, SVP of consumer revenue at Meredith Corp., has noted a “significant shift” in consumer interest toward cooking at home, and that sales of cooking supplies have seen a sharp increase, as have shelter-in-place essentials like face masks, hand sanitizer, cleaning supplies and home office furniture and accessories.

“Most brands across Meredith’s portfolio are continuing to experience strong e-commerce/affiliate performances,” he tells Folio:. “We’re on track to drive over $500 million in retail sales this year.”

It’s a similar story at Condé Nast, where e-commerce revenue at both Epicurious and Self increased by more than 70% in March, year-over-year.

“It’s not just traffic, it’s newsletters, referrals from social, really everything we do has been up, including our affiliate revenue,” says David Tamarkin, digital director at Epicurious. “People are turning to cooking, not just for comfort but out of necessity, and a lot of people are doing it for the first time.” 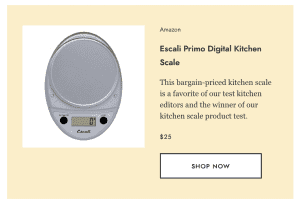 In particular, sales of meal delivery services nearly tripled year-over-year in March, and sales of cooking and baking products recommended by Epicurious editors are also up, including, for example, kitchen scales, sales of which have increased tenfold since the start of the pandemic.

On top of the obvious matter of necessity, as consumers are less inclined or in many cases unable to shop offline, Tamarkin credits the surge in the brand’s e-commerce business to his team’s ability to quickly adapt the content strategy to the moment.

Earlier plans for major packages related to cakes and spices have been paused in favor of more pressing initiatives around meal planning, including “Cooking Through It,” a new series that aims to provide a series of “flexible” recipes that readers can follow to help plan out their weeks and minimize trips to the grocery store.

More than half of the Epicurious editorial team is devoted to commerce content, which Tamarkin says is a natural fit for the brand. After all, executing a good recipe requires first purchasing the right tools.

“There’s a parallel between a good recipe and a good product review,” he says. “Both of those things should always be in the service of the reader. I would never want anybody to cook one of our recipes and say it didn’t work, and I would never want anybody to buy something based on our product reviews and say it was no good. We have to take the same serious approach to both, and because we do and we always keep the home cook in mind, it just fits.”

Like at Epicurious, affiliate revenue is growing at Self in part because the brand has already established itself as a trusted resource available to readers in a time of need, says editor-in-chief Carolyn Kylstra.

“We’ve seen a tremendous spike in search traffic to our fitness content—workouts you can do at home, how to develop an at-home workout routine—and then from an e-commerce perspective, all of the things associated with at-home fitness, the gear, the apparel, the stuff that you need to make it easier for yourself,” she says. 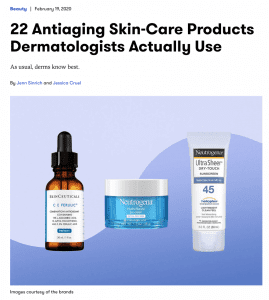 Commerce content at Self—which more than doubled in March in terms of both unique visitors and time spent—typically comes in one of three formats: expert recommendations, like dermatologists’ picks for skincare products, roundups of products featured in the brand’s annual “Healthy Beauty Awards,” which themselves are subject to testing on a wide range of criteria, as well as editors’ picks.

In any case, the underpinning strategy is maintaining consumers’ trust.

“Our audience trusts the recommendations that we give them. On top of that, there are a lot of people who have lost their jobs or had their salaries reduced, so right now, people want to make sure that what they are spending their money on is worth it,” Kylstra says. “They know that when we say something is worth spending money on—whether it’s the best yoga mat or leggings or sneakers—that they can feel good about buying it.”

The at-home fitness boom isn’t confined to the readers of Men’s Health or Self. It’s also paying dividends at Active Interest Media, which has been leaning even further into its affiliate revenue strategy since the start of the pandemic, says Sharon Houghton, VP and group publisher of the company’s active living group, which includes Yoga Journal, Backpacker and Clean Eating, among other titles.

An increased output of commerce content, as well as adding suggested product links to previously published articles, helped drive an exponential increase in Amazon sales across the AIM portfolio when comparing Q1 of 2020 to Q4 of 2019, Houghton says, as well as a 114% increase in combined sales across all of the company’s other affiliate partners, with the majority of Q1 sales in both cases coming during spikes in the last two weeks of March. 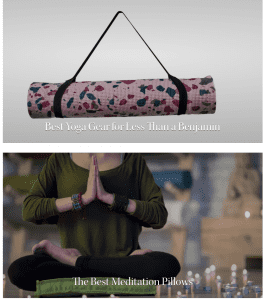 Moving into the second quarter of the year, AIM has felt some impact from Amazon’s decision to cut affiliate commission rates across several product categories, including health and personal care, sports and household products—something that Houghton says underscores the importance of maintaining a diversity of retail partners.

“Even with lower rates, [Amazon] will deliver for us, and hopefully those will come back up at some point, but they may not either,” she says. “So we have to have a healthy mix of affiliate strategies and partners.”

Tamarkin agrees, noting that an aversion to over-dependence is key to a healthy affiliate strategy at Epicurious, just as it is to a healthy audience strategy.

“It’s no secret that affiliate revenue is built on a system that we are not entirely in control of, but my entire website is built on systems like that,” he says. “I can’t control Google’s algorithm. We’re a very search-based website. When that algorithm changes, my traffic changes. The best thing we can do is be well-prepared and diversify. In the same way, we have to be sure that not all of our revenue is coming from the same place. A lot of it does come from Amazon, but we are actively thinking about other places.”

One thing Epicurious is experimenting with is adding multiple buy buttons to its product recommendations, giving consumers a choice of more than one retailer, a tactic which review sites like The New York Times‘ Wirecutter make frequent use of.

“Obviously, being in media, it’s really important to diversify your revenue streams in a way that is authentic to the brand,” adds Kylstra. “We have to make sure that we stand behind everything we recommend and explain why we’re recommending it. The trust that we’ve built up by existing for 40 years is something that we don’t take for granted; it’s absolutely crucial to our business. Short-term gains aren’t worth sacrificing that trust.”