After an outpouring from the publishing industry in response to FOLIO:’s request for covers commemorating the tenth anniversary of the September 11, 2001 attacks, we decided to run a second installment of 9/11 tribute covers. Some publishers are choosing to focus on the day of the tragedy; others are analyzing the ten years which followed it; while others use the tribute platform to celebrate 9/11’s survivors. Here are a few more ways publishers are remembering 9/11, ten years later. 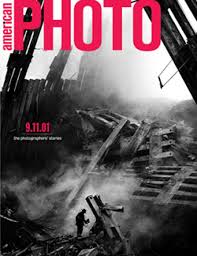 From American Photo: On September 11, 2001, terrorist attacks in New York City, Washington, D.C., and rural Pennsylvania rocked the national consciousness. In New York, as most fled the destruction, police, firemen and emergency workers pushed headlong into its maw. A brave few followed in their wake, carrying cameras to document history. American Photo magazine honors those photographers in a special cover story, “The Sky is Falling,” featured in its September/October 2011 issue.

This month, the magazine is releasing a free standalone iPad edition of the story titled “9/11/01: The Photographers’ Stories.” The app will expand on the experiences of the incredible photographers who covered 9/11 with more extensive interviews and photos. In lieu of payment for the app, American Photo, along with the photographers represented in the story, strongly encourage readers to make a contribution to one of the charities on the in-app donation page, which features organizations focused on the NYPD, the FDNY, children who lost parents on 9/11, journalists, Afghan children and more. The charities can be found here. 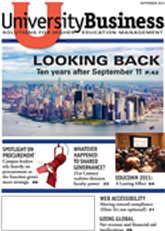 Believe it or not, it was difficult to find an aerial shot encompassing as much of lower Manhattan and its surrounds as we did. I wanted to find a sunny shot like it was on that fateful day; a beautiful day with a horrible outcome. There were many older shots before 9/11 but we wanted to focus on the ten years since.

After reading the story and the authors’ reflections, my own memories of that day came to mind; thoughts about my daughter and my friends who worked in Manhattan, and of course, all the people that didn’t make it home that day. 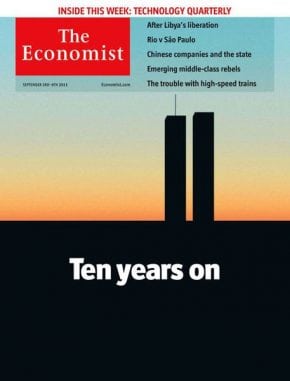 From The Economist’s “This Week’s Highlights”: On the eve of the tenth anniversary of the attack on the twin towers and the Pentagon, our two-page cover story this week reflects on the successes and failures of America’s response over the past decade.

As September 11th 2001 fades into the history books, America has started to move on. A host of different problems now plague the country: the 2012 election will focus less on the thing once called the global war on terror and more on gridlock in Washington, lost jobs, soaring spending and towering debt. Yet America cannot afford to drop its guard against al-Qaeda.

From an ASME news release: Appearing in chronological order and spanning the decade between September 2001 and September 2011, the retrospective provides a powerful and often emotional overview of the tragic events that occurred on 9/11 and the aftershocks that continue to be felt to this day.

From shocking photographs on the covers of the newsweeklies, to interpretive images on business, science, sports and entertainment publications, the 9/11 magazine covers capture a range of perspectives on a defining moment in American history. Magazines with covers featured in the retrospective include TIME, Newsweek, New York and The New Yorker – as well as magazines such as Sports Illustrated, Mad, Entertainment Weekly and the now-defunct Yahoo! Internet Life. 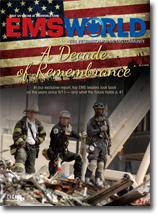 On the occasion of the 10th anniversary of 9/11, EMS World talked to six top EMS leaders about what the last decade has meant for emergency preparedness and response–what’s changed for the better, what’s not changed enough, and how we might navigate an uncertain future in a world that’s still plenty threatening.

As part of that coverage, we wanted to select a cover that emphasized those individuals who not only responded to the attacks on the attacks on 9/11, but also continue to serve their communities providing emergency medical care on a daily basis. We have used a lot of FEMA photos of the 9/11 attack on the World Trade Center and this one by Andrea Booher seemed to capture the emotion and resolve of those individuals who responded on 9/11. 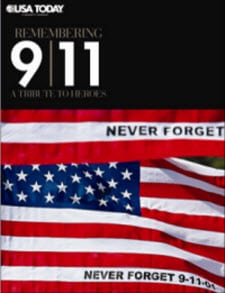 From a company press release: Currently on newsstands, a USA TODAY glossy magazine entitled “Remembering 9/11: A Tribute to Heroes” featuring a photo gallery of ten anniversaries and a look at America’s three 9/11 memorials. The glossy will be on sale through October 23rd at newsstands. 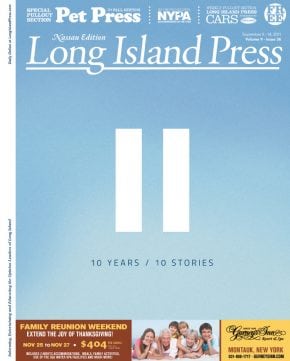 A decade after the tragedy of September 11th, we pause and reflect. We did 10 stories: