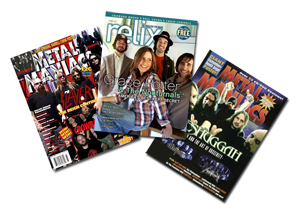 Zenbu Media, the New York-based publisher of niche music magazines including Relix, Metal Edge and Metal Maniacs, is putting one of those titles, Metal Maniacs, on hiatus, while mulling the future of the other two.

“This afternoon Metal Maniacs […] officially closed its doors,” Ciavarella wrote. “The exact reasons are still a little hazy but it appears that no one is immune to the crashing economy. We’ve been told we are on ‘hiatus,’ which means the coffin hasn’t been shut just yet.”

“Our ad honcho Dov Teta and I are scrambling for a potential solution,” Ciavarella continued. “And with any luck, I hope to be sending a far less grim email in the not so distant future.”

According to a source at Metal Edge, the staff is "putting together its final issue.”

According to a source at Zenbu, the "next few issues” of Relix will be published—its future after that remains unclear. “There are a lot of balls in the air,” the source said, indicating the company is seeking a fresh infusion of cash, or a sale of some of its assets, including Metal Maniacs. The Zenbu source, however, insisted the company is “not up for sale.”

Metal Edge and Metal Maniacs, which Zenbu acquired in 2006, had been publishing 10 issues per year; Relix had published eight. Zenbu also produces events, including the Green Apple Music Festival.

Global Rhythm, a world music magazine that Zenbu had published, closed its print edition last fall. A planned redesign of its Web site was also scrapped.