Prevention Cuts Rate Base 15 Percent
Guaranteed circ to drop from 3.3 million to 2.8 million. 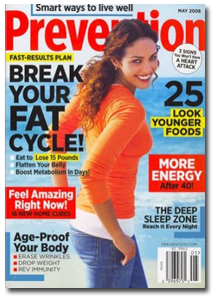 Emmaus, Pennsylvania-based Rodale Friday said it would lower the rate base of Prevention from 3.3 million to 2.8 million—a decrease of 15 percent.

According to newly-appointed senior vice president and publisher Mary Murcko, dropping Prevention’s rate base betters serves its advertisers. “Advertisers today want to know they’re reaching the best of the best when it comes to consumers,” she said. “With that in mind, we’re focusing on quality over quantity in terms of our readership, which we are confident will benefit our marketing partners in the long-run.”

Last year, Prevention saw its total paid and verified circ drop slightly, down 1.3 percent, from 2007, according to FAS-FAX figures. Newsstand sales were down considerably (-13.8 percent) to 332,249. By itself, verified circ has remained relatively stable since its December 2007 statement, but the magazine’s partnership deductible circ has tripled, going from just over 100,000 to slightly over 300,000.

Ad pages last year were down 12.4 percent, according to the Publishers Information Bureau.

Murcko was appointed SVP and publisher earlier this month as part of a restructuring. She replaced publisher Bob Ziltz, who has since joined Parade as eastern region advertising director.