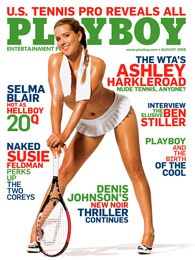 The loss last quarter includes $8.7 million of impairment and restructuring charges. "We are beginning to see the results of the extensive restructuring and cost-reduction work that we began implementing in last year’s fourth quarter,” Kern said in a statement. “These initiatives allowed us to offset all but $1.4 million of the nearly $17 million revenue decline and led to improved margins in our TV and digital businesses, despite a lower revenue base.”

Last October, Playboy eliminated 80 jobs and closed the company’s DVD business. Earlier this year the company combined its print and online editorial operations and closed down its New York office, moving it to Chicago. According to Kern, the company has reduced headcount by more than 25 percent and taken roughly $18 million in annual personnel-related costs out of the company.

Print ‘A Key Focus of Attention’

During the call, Kern said Playboy is considering "radical changes" of the print business model, including price increases, a frequency reduction and lowering its rate base of 2.6 million. The company said it would combine Playboy’s
July and August issues into a double issue.

The most significant factor in the loss was its outsourcing of e-commerce, the company said. "The publishing business remains a key focus of our attention,” Kern said. “Despite a first quarter that was weaker than last year … we believe the magazine’s bottom line will improve in 2009 versus last year. This performance is still not acceptable, however, and we expect to continue making changes that will lead to further improvements in the magazine’s financial results."

Late last year, Playboy founder Hugh Hefner’s daughter, Christie Hefner, announced her resignation as chairman and CEO. During the call, Kern said the board of directors is meeting Wednesday and that he is "confident" a full-time CEO will be named this summer.

Kern declined to comment when asked about internal disagreements over whom the company will select as its new chief executive.