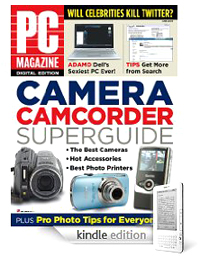 PC Magazine, the tech title that went all-digital in January, is expanding its digital presence on Amazon’s Kindle.

PC Magazine’s digital version will be available on the device—beginning today with its June issue—at a monthly subscription price of $1.49. Subscriptions to the PCMag Digital Network blogs, including Gearlog, Appscout and GoodCleanTech, are also available for Kindle customers, at $0.99 per month.

Time, Newsweek, the Atlantic, Reader’s Digest and the New Yorker already have digital versions of their magazines available in the Kindle Store.

Lance Ulanoff, senior vice president of content for the PCMag Digital Network, said the goal is to expand “our potential reader base and [give] consumers a new opportunity to interact with our brand.”

Last November, Ziff Davis Media announced  that its flagship PC Magazine would no longer be published in print. The biweekly magazine carried a rate base of 700,000.

CEO Jason Young said the move was “the final step in an evolutionary process that has been playing out over the last seven years.” In 2008, ZDM’s digital business accounted for about 80 percent of profit and 70 percent of its revenue, he said.