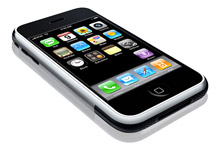 Calling it “the first of its kind,” the bimonthly will be distributed via iTunes for 99 cents per issue. Content will be refreshed daily in order to give readers “an inside look into the glamorous world of Patrick McMullan and his peers.”

It may be a first for the iPhone, but not for other trendy portable devices. Earlier this year, Tribune Media Services, the content syndication and licensing division of Chicago-based Tribune Company, launched a pair of magazines exclusively for Amazon’s Kindle.