Given the unpredictability of the paper market, and paper’s status as one of the largest cost centers for publishers, it’s vital to keep close tabs on all aspects of paper buying. While one can easily feel stuck, with little room to make a bottom-line difference, options do exist for mitigating costs. Identifying those options can take a good deal of work and attention.

Perhaps the most common way to drive down cost, and also streamline the buying process, is to consolidate trim sizes, especially to standardized formats. 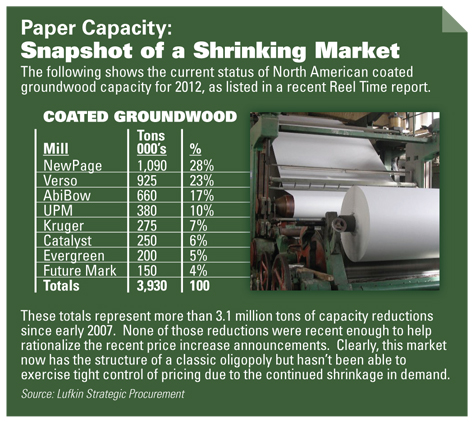 Tom Fogarty, director of production at Vance Publishing, says his company made the switch to standardized trim sizes more than three years ago. While he says it “was not the most salable thing” for editorial and sales, he was able to eventually make the case based on cost savings. If he could, Fogarty says he would reduce his current body stock down from a 38-pound number 5 sheet to a 36 or 32-pound basis weight, but “publishers are resistant. It’s a tough sell in the marketplace.”

Nick Elsener, VP of production at Hanley Wood, agrees that standardization is key—especially during a time of such market volatility: “The more standard you are, the more choices you have. You want to be on machines that are giving the mills maximum efficiency, because you’re going to get less of a deal if they can’t maximize their margin as well.” 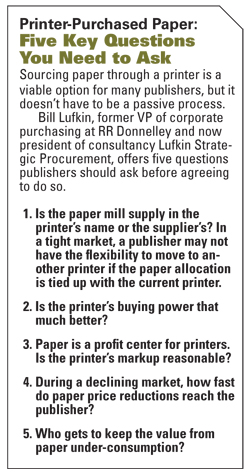 Consolidating trim sizes can save a lot of time and money but can present a special challenge with new acquisitions. What helps, Elsener offers, is to visit with various groups as well as management—before budget time—and demonstrate the potential savings. An easy switch he suggests is from a long to a short cut-off, which can result in usage savings of about 4 to 4.5 percent.

Elsener also advises minimizing the number of “niche” papers used. However, in a case where he sources a number three sheet made only overseas, with a special finish desired by the publication’s art directors, he says he buys a little extra to make sure he has enough.

But for Claudia Smukler, production director for Mother Jones, there are too few choices that meet her priorities for a lightweight coated grade 5, environmentally-sustainable, low-cost paper manufactured in North America. While she previously purchased a German-manufactured paper—“a good sheet with a fine environmental story”—she was unhappy with the nearly 100-day lead-time and has since switched to a North American product, cutting the lead-time down by 45 days.

While many publishers prefer to simplify the paper-buying process by deferring to their printers, doing so can lead to unnecessarily—and, often, unnoticed—cost.

One important reason for this is paper waste. According to Bill Lufkin, former VP of corporate purchasing at RR Donnelley and now president of Lufkin Strategic Procurement, most contracts with paper vendors stipulate a 50/50 split of savings from under-consumption, a savings publishers wouldn’t likely see with printer-bought paper.

Elsener sources about one-third of his paper through his printer. “In most cases, I would not recommend buying all your paper from a printer,” he says. “But if you can set it up where you’re watching the actual usage and you can negotiate pricing and control the waste together, then it’s not a problem.” But, he adds, that is not always the norm.

Currently, Fogarty buys paper from two vendors. “I have always had the philosophy of not having all our eggs in one basket.” He runs what he likes to call a “sanity check”—an annual review of vendors’ pricing, compared to printer-supplied paper—to “keep the market honest.”

Smukler also prefers buying her own paper and, like Fogarty, does so from two merchants—even with what she calls her “modest” need of 250 tons per year.

To stay on top of pricing, Elsener suggests getting commitments early. “At the first of the year, if you can get a commitment to July, that’s preferable,” he says. For the two-thirds of his paper he buys directly from vendors, he tries to stick with mills that are less likely to shut down. “You have to constantly monitor the market,” he adds. “There are a lot of mixed signals going out.”

Fogarty agrees: “Paper is a commodity. When you’re asked to create a budget in September and forecast paper twelve months out, you lean on your vendors and suppliers to see where they think we’ll be, but it truly is a roll of the dice.”

“It takes an intuitive sense to proceed as a buyer in this marketplace,” says Smukler. “I keep in touch with other manufacturing directors, read newsletters and follow important people on Twitter. I take calls from printers and paper sellers. You never know where new insights will come from.”