PandoDaily’s Sarah Lacy on Digital Publishing Startups: Like Chewing On Glass
In keynote, talks benefits and misconceptions of entrepreneurial journalism. 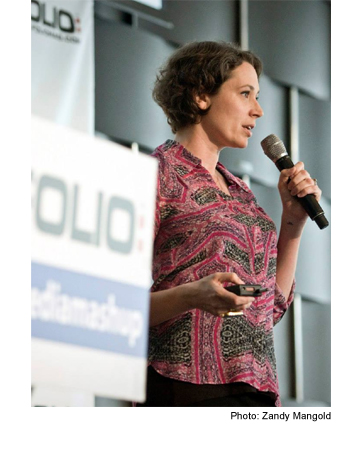 New York—PandoDaily founder and CEO Sarah Lacy took to the stage for an afternoon keynote at FOLIO:’s MediaMashup event Thursday to explain why entrepreneurial journalism isn’t new, why it would be terrible if all the best journalists started their own media companies and why she could still taste blood in her mouth two years after starting her company.

“If you’re going to start a company, the number-one thing to know—as hard as journalism itself is, as hard as breaking a big story is, as hard as dealing with editors is—actually building a company around journalism is about a million times harder,” Lacy told the audience.

PandoDaily, founded in January of 2012, offers readers news and analysis of the technology market, as well as commentary on Silicon Valley happenings and the latest startup companies. Her reference to tasting blood comes from a quote by Tesla and SpaceX CEO Elon Musk who described starting a business as “staring into the edge of the abyss while chewing glass.”

“You have to be a masochist,” says Lacy of starting a media business in today’s market.

Despite the early and fast-growing success of PandoDaily, Lacy contends it’s telling how dominant old-media brands still are 15 years after “old media” was first proclaimed dead. Lacy says it has to do a lot with brand trust and intention—something she claims the new media companies have in spades.

“Whether it’s us, Vox or BuzzFeed—they have the right intentions, smarter business models and more capital behind them,” says Lacy. “With the last generation of media companies, it was a lot of people who wanted to be entrepreneurs rather than journalists.”

Nevertheless, Lacy claims while founder/CEOs like her are the best bets at running new media companies well, it doesn’t behoove all great journalists to break off from established media brands.

“Not everyone has to start their own company—you can Voltron up,” says Lacy. “If every great journalist peels off and starts their own company, they’re ultimately not writing very much. Five or six really amazing journalists can band together and be worth so much more.”